A Sub-arcsecond Survey Toward Class 0 Protostars in Perseus: Searching for Signatures of Protostellar Disks

We present a 1.3 mm dust continuum survey toward nine Class 0 protostars and two Class I protostars in the Perseus molecular cloud, using CARMA with a resolution of ∼0.″3 (70 AU). This sample approximately doubles the number of Class 0 protostars observed with spatial resolutions <100 AU at millimeter wavelengths, enabling the presence of large protostellar disks and proto-binary systems to be probed. We have detected flattened structures with radii >100 AU around two sources (L1448 IRS2 and Per-emb-14), and these sources may be strong disk candidates. Marginally resolved structures within 30° of perpendicular to the outflow are found toward three protostars (L1448 IRS3C, IRAS 03282+3035, L1448C) and are considered disk candidates. Two others (L1448 IRS3B, IRAS 03292+3039) have complex resolved structures, possibly indicative of massive, fragmenting inner envelopes or disks; L1448 IRS3B also has evidence for a companion separated by 0.″9 (∼210 AU). The candidate first hydrostatic core L1451-MMS is marginally resolved on 1″ scales and the Class 0 protostar IC 348-MMS and does not have strong indications of resolved structure at any scale. The strong disk candidate sources were followed up with C18O (J=2\to 1) observations; we detect velocity gradients that are consistent with the expected rotation axis, but without enough sensitivity to determine if it is Keplerian. We compare the observed visibility amplitudes to radiative transfer models of protostellar envelopes and disks. The visibility amplitude ratios show that a compact component (possibly a disk) is necessary for five of nine Class 0 sources. An envelope-only scenario cannot be ruled out for the other four Class 0 sources. We conclude that there is evidence for the formation of large disks in the Class 0 phase, but Class 0 disks likely have a range of radii and masses that depend on the initial conditions of their parent cores. 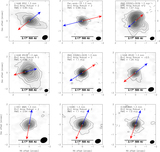