A recent Atacama Large Millimeter/Submillimeter Array image revealed several concentric gaps in the protoplanetary disk surrounding the young star HL Tau. We consider the hypothesis that these gaps are carved by planets, and present a general framework for understanding the dynamical stability of such systems over typical disk lifetimes, providing estimates for the maximum planetary masses. We collect these easily evaluated constraints into a workflow that can help guide the design and interpretation of new observational campaigns and numerical simulations of gap opening in such systems. We argue that the locations of resonances should be significantly shifted in massive disks like HL Tau, and that theoretical uncertainties in the exact offset, together with observational errors, imply a large uncertainty in the dynamical state and stability in such disks. This presents an important barrier to using systems like HL Tau as a proxy for the initial conditions following planet formation. An important observational avenue to breaking this degeneracy is to search for eccentric gaps, which could implicate resonantly interacting planets. Unfortunately, massive disks like HL Tau should induce swift pericenter precession that would smear out any such eccentric features of planetary origin. This motivates pushing toward more typical, less massive disks. For a nominal non-resonant model of the HL Tau system with five planets, we find a maximum mass for the outer three bodies of approximately 2 Neptune masses. In a resonant configuration, these planets can reach at least the mass of Saturn. The inner two planets’ masses are unconstrained by dynamical stability arguments. 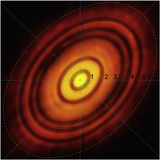