HST Images Reveal Dramatic Changes in the Core of IRC+10216

IRC+10216 is the nearest carbon star with a very high mass-loss rate. The existence of a binary companion has been hinted at by indirect observational evidence, such as the bipolar morphology of its nebula and a spiral-like pattern in its circumstellar material; however, to date, no companion has been identified. We have examined archival Hubble Space Telescope images of IRC+10216, and find that the images taken in 2011 exhibit dramatic changes in its innermost region from those taken at earlier epochs. The scattered light is more spread out in 2011. After proper motion correction, the brightest peak in 2011 is close to, but not coincident with, the dominant peak in previous epochs. A fainter point-like object was revealed at ∼0.″5 from this brightest peak. We suggest that these changes at the core of IRC+10216 are caused by dissipation of intervening circumstellar dust, as indicated by the brightening trend in the light curve extracted from the Catalina photometric survey. We tentatively identify the brightest peak in 2011 as the primary star of IRC+10216 and the fainter point-like source as a companion. The cause of non-detections of the companion candidate in earlier epochs is uncertain. These identifications need to be verified by monitoring the core of IRC+10216 at high resolution in the future. 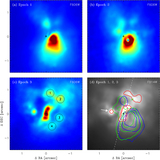