How rapidly collapsing parsec-scale massive molecular clumps feed high-mass stars and how they fragment to form OB clusters have been outstanding questions in the field of star formation. In this work, we report the resolved structures and kinematics of the approximately face-on, rotating massive molecular clump, G33.92+0.11. Our high-resolution Atacama Large Millimeter/submillimeter Array images show that the spiral arm-like gas overdensities form in the eccentric gas accretion streams. First, we resolved that the dominant part of the ∼0.6 pc scale massive molecular clump (3.0-1.4+2.8·103 {{M}⊙ }) G33.92+0.11 A is tangled with several 0.5-1 pc size molecular arms spiraling around it, which may be connected further to exterior gas accretion streams. Within G33.92+0.11 A, we resolved the ∼0.1 pc width gas mini-arms connecting to the two central massive (100-300 {{M}⊙ }) molecular cores. The kinematics of arms and cores elucidate a coherent accretion flow continuing from large to small scales. We demonstrate that the large molecular arms are indeed the cradles of dense cores, which are likely current or future sites of high-mass star formation. Since these deeply embedded massive molecular clumps preferentially form the highest-mass stars in the clusters, we argue that dense cores fed by or formed within molecular arms play a key role in making the upper end of the stellar and core mass functions. 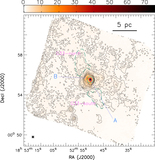