It is not yet clear what triggers the activity of active galactic nuclei (AGNs), but galaxy merging has been suspected to be one of the main mechanisms fueling the activity. Using deep optical images taken at various ground-based telescopes, we investigate the fraction of galaxy mergers in 39 luminous AGNs (MR ≲ -22.6 mag) at z ≤ 0.3 (a median redshift of 0.155), for which the host galaxies are generally considered as early-type galaxies. Through visual inspection of the images, we find that 17 of 39 AGN host galaxies (43.6%) show evidence for current or past mergers like tidal tails, shells, and disturbed morphology. In order to see if this fraction is abnormally high, we also examined the merging fraction of normal early-type galaxies in the Sloan Digital Sky Survey (SDSS) Stripe 82 data (a median redshift of 0.04), of which the surface-brightness limit is comparable to our imaging data. To correct for the effects related to the redshift difference of the two samples, we performed an image simulation by putting a bright point source as an artificial AGN in the images of SDSS early-type galaxies and placing them onto the redshifts of AGNs. The merging fraction in this realistic sample of simulated AGNs is only ∼5-15% (1/4 to 1/8 of that of real AGNs). Our result strongly suggests that luminous AGN activity is associated with galaxy merging. 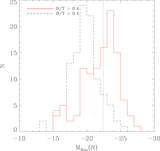