Photoionization Heating of Nova Ejecta by the Post-outburst Supersoft Source

The expanding ejecta from a classical nova remains hot enough (∼ {{10}4} K) to be detected in thermal radio emission for up to years after the cessation of mass loss triggered by a thermonuclear instability on the underlying white dwarf (WD). Nebular spectroscopy of nova remnants confirms the hot temperatures observed in radio observations. During this same period, the unstable thermonuclear burning transitions to a prolonged period of stable burning of the remnant hydrogen-rich envelope, causing the WD to become, temporarily, a super-soft X-ray source. We show that photoionization heating of the expanding ejecta by the hot WD maintains the observed nearly constant temperature of (1-4) × {{10}4} K for up to a year before an eventual decline in temperature due to either the cessation of the supersoft phase or the onset of a predominantly adiabatic expansion. We simulate the expanding ejecta using a one-zone model as well as the Cloudy spectral synthesis code, both incorporating the time-dependent WD effective temperatures for a range of masses from 0.60 {{M}⊙ } to 1.10 {{M}⊙ }. We show that the duration of the nearly isothermal phase depends most strongly on the velocity and mass of the ejecta and that the ejecta temperature depends on the WD’s effective temperature, and hence its mass. 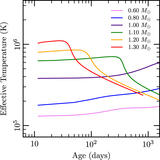