We have investigated chromospheric traveling features running across two merged pores from their centers at speeds of about 55 km s-1, in the active region AR 11828. The pores were observed on 2013 August 24 by using high-time, spatial, and spectral resolution data from the Fast Imaging Solar Spectrograph of the 1.6 m New Solar Telescope. We infer a line-of-sight (LOS) velocity by applying the lambdameter method to the Ca ii 8542 Å band and Hα band, and investigate intensity and LOS velocity changes at different wavelengths and different positions at the pores. We find that they have three-minute oscillations, and the intensity oscillation from the line center (0.0 \overset{\circ}A ) is preceded by that from the core (-0.3 \overset{\circ}A ) of the bands. There is no phase difference between the intensity and the LOS velocity oscillations at a given wavelength. The amplitude of LOS velocity from the near core spectra ({∆ }λ =0.10-0.21 \overset{\circ}A ) is greater than that from the far core spectra ({∆ }λ =0.24-0.36 \overset{\circ}A ). These results support the interpretation of the observed wave as a slow magnetoacoustic wave propagating along the magnetic field lines in the pores. The apparent horizontal motion and a sudden decrease of its speed beyond the pores can be explained by the projection effect caused by inclination of the magnetic field with a canopy structure. We conclude that the observed wave properties of the pores are quite similar to those from the sunspot observations. 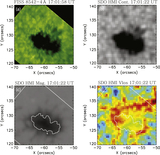