The Identification of Z-dropouts in Pan-STARRS1: Three Quasars at 6.5< z< 6.7

Luminous distant quasars are unique probes of the high-redshift intergalactic medium (IGM) and of the growth of massive galaxies and black holes in the early universe. Absorption due to neutral hydrogen in the IGM makes quasars beyond a redshift of z≃ 6.5 very faint in the optical z band, thus locating quasars at higher redshifts requires large surveys that are sensitive above 1 micron. We report the discovery of three new z\gt 6.5 quasars, corresponding to an age of the universe of \lt 850 Myr, selected as z-band dropouts in the Pan-STARRS1 survey. This increases the number of known z\gt 6.5 quasars from four to seven. The quasars have redshifts of z = 6.50, 6.52, and 6.66, and include the brightest z-dropout quasar reported to date, PSO J036.5078 + 03.0498 with {{M}1450}=-27.4. We obtained near-infrared spectroscopy for the quasars, and from the Mg ii line, we estimate that the central black holes have masses between 5 × 108 and 4 × 109 {{M}☉ } and are accreting close to the Eddington limit ({{L}Bol}/{{L}Edd}=0.13-1.2). We investigate the ionized regions around the quasars and find near-zone radii of {{R}NZ}=1.5-5.2 proper Mpc, confirming the trend of decreasing near-zone sizes with increasing redshift found for quasars at 5.7\lt z\lt 6.4. By combining RNZ of the PS1 quasars with those of 5.7\lt z\lt 7.1 quasars in the literature, we derive a luminosity-corrected redshift evolution of {{R}NZ,corrected}=(7.2+/- 0.2)-(6.1+/- 0.7)× (z-6) Mpc. However, the large spread in RNZ in the new quasars implies a wide range in quasar ages and/or a large variation in the neutral hydrogen fraction along different lines of sight.

Based in part on observations collected at the European Southern Observatory, Chile, programs 179.A-2010, 092.A-0150, 093.A-0863, and 093.A-0574, and at the Centro Astronómico Hispano Alemán (CAHA) at Calar Alto, operated jointly by the Max-Planck Institut für Astronomie and the Instituto de Astrofísica de Andalucía (CSIC). This paper also includes data gathered with the 6.5 m Magellan Telescopes located at Las Campanas Observatory, Chile, at the MMT Observatory, a joint facility of the University of Arizona and the Smithsonian Institution, and with the LBT. 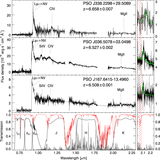