On 2014 October 14 the Sun Watcher with Active Pixels and Image Processing EUV solar telescope on board the Project for On Board Autonomy 2 spacecraft observed an eruption that led to the formation of perhaps the largest post-eruptive loop system seen in the solar corona in solar cycle 24. The initial eruption occurred at about 18:30 UT on October 14, behind the east Solar limb, and was observed as a a coronal mass ejection and an M2.2 solar flare. In the 48 hr following the eruption, the associated post-eruptive loops grew to a height of approximately 4× {{10}5} km (\gt 0.5 {{R}⊙ }) at rates between 2 and 6 km {{s}-1}. We conclude from our observations of this event that ordinary post-eruptive loops and so-called post-flare giant arches are fundamentally the same and are formed by the same magnetic reconnection mechanism. 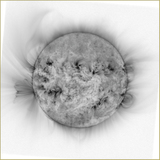