The Mass of Kepler-93b and The Composition of Terrestrial Planets

Kepler-93b is a 1.478 ± 0.019 R ⊕ planet with a 4.7 day period around a bright (V = 10.2), astroseismically characterized host star with a mass of 0.911 ± 0.033 M ⊙ and a radius of 0.919 ± 0.011 R ⊙. Based on 86 radial velocity observations obtained with the HARPS-N spectrograph on the Telescopio Nazionale Galileo and 32 archival Keck/HIRES observations, we present a precise mass estimate of 4.02 ± 0.68 M ⊕. The corresponding high density of 6.88 ± 1.18 g cm-3 is consistent with a rocky composition of primarily iron and magnesium silicate. We compare Kepler-93b to other dense planets with well-constrained parameters and find that between 1 and 6 M ⊕, all dense planets including the Earth and Venus are well-described by the same fixed ratio of iron to magnesium silicate. There are as of yet no examples of such planets with masses >6 M ⊕. All known planets in this mass regime have lower densities requiring significant fractions of volatiles or H/He gas. We also constrain the mass and period of the outer companion in the Kepler-93 system from the long-term radial velocity trend and archival adaptive optics images. As the sample of dense planets with well-constrained masses and radii continues to grow, we will be able to test whether the fixed compositional model found for the seven dense planets considered in this paper extends to the full population of 1-6 M ⊕ planets.

Based on observations made with the Italian Telescopio Nazionale Galileo (TNG) operated on the island of La Palma by the Fundación Galileo Galilei of the INAF (Istituto Nazionale di Astrofisica) at the Spanish Observatorio del Roque de los Muchachos of the Instituto de Astrofisica de Canarias. 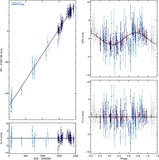