Dust Attenuation in High Redshift Galaxies: "Diamonds in the Sky"

We use observed optical to near-infrared spectral energy distributions (SEDs) of 266 galaxies in the COSMOS survey to derive the wavelength dependence of the dust attenuation at high redshift. All of the galaxies have spectroscopic redshifts in the range z = 2-6.5. The presence of the C IV absorption feature, indicating that the rest-frame UV-optical SED is dominated by OB stars, is used to select objects for which the intrinsic, unattenuated spectrum has a well-established shape. Comparison of this intrinsic spectrum with the observed broadband photometric SED then permits derivation of the wavelength dependence of the dust attenuation. The derived dust attenuation curve is similar in overall shape to the Calzetti curve for local starburst galaxies. We also see the 2175 Å bump feature which is present in the Milky Way and Large Magellanic Cloud extinction curves but not seen in the Calzetti curve. The bump feature is commonly attributed to graphite or polycyclic aromatic hydrocarbons. No significant dependence is seen with redshift between sub-samples at z = 2-4 and z = 4-6.5. The "extinction" curve obtained here provides a firm basis for color and extinction corrections of high redshift galaxy photometry. 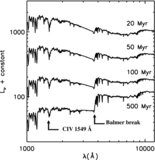