We use near-infrared grism spectroscopy from the Hubble Space Telescope to examine the strength of [Ne III] λ3869 relative to Hβ, [O II] λ3727, and [O III] λ5007 in 236 low-mass (7.5 <~ log (M */M ☉) <~ 10.5) star-forming galaxies in the redshift range 1.90 < z < 2.35. By stacking the data by stellar mass, we show that the [Ne III]/[O II] ratios of the z ~ 2 universe are marginally higher than those seen in a comparable set of local Sloan Digital Sky Survey galaxies, and that [Ne III]/[O III] is enhanced by ~0.2 dex. We consider the possible explanations for this ~4σ result, including higher oxygen depletion out of the gas phase, denser H II regions, higher production of 22Ne via Wolf-Rayet stars, and the existence of a larger population of X-ray obscured active galactic nuclei at z ~ 2 compared to z ~ 0. None of these simple scenarios, alone, are favored to explain the observed line ratios. We conclude by suggesting several avenues of future observations to further explore the mystery of enhanced [Ne III] emission. 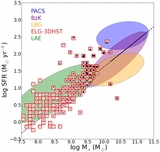