Binary neutron star (NS) mergers are among the most promising sources of gravitational waves (GWs), as well as candidate progenitors for short gamma-ray bursts (SGRBs). Depending on the total initial mass of the system and the NS equation of state (EOS), the post-merger phase can be characterized by a prompt collapse to a black hole or by the formation of a supramassive NS, or even a stable NS. In the latter cases of post-merger NS (PMNS) formation, magnetic field amplification during the merger will produce a magnetar and induce a mass quadrupole moment in the newly formed NS. If the timescale for orthogonalization of the magnetic symmetry axis with the spin axis is smaller than the spindown time, the NS will radiate its spin down energy primarily via GWs. Here we study this scenario for the various outcomes of NS formation: we generalize the set of equilibrium states for a twisted torus magnetic configuration to include solutions that, for the same external dipolar field, carry a larger magnetic energy reservoir; we hence compute the magnetic ellipticity for such configurations, and the corresponding strength of the expected GW signal as a function of the relative magnitude of the dipolar and toroidal field components. The relative number of GW detections from PMNSs and from binary NSs is a very strong function of the NS EOS, being higher (~1%) for the stiffest EOSs and negligibly small for the softest ones. For intermediate-stiffness EOSs, such as the n = 4/7 polytrope recently used by Giacomazzo and Perna or the GM1 used by Lasky et al., the relative fraction is ~0.3%; correspondingly, we estimate a GW detection rate from stable PMNSs of ~0.1-1 yr-1 with advanced detectors, and of ~100-1000 yr-1 with detectors of third generation such as the Einstein Telescope. Measurement of such GW signals would provide constraints on the NS EOS and, in connection with an SGRB, on the nature of the binary progenitors giving rise to these events. 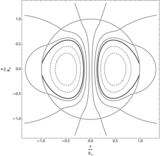