Absolute Proper Motions Outside the Plane (APOP)&mdashA Step Toward the GSC2.4

We present a new catalog of absolute proper motions and updated positions derived from the same Space Telescope Science Institute digitized Schmidt survey plates utilized for the construction of Guide Star Catalog II. As special attention was devoted to the absolutization process and the removal of position, magnitude, and color dependent systematic errors through the use of both stars and galaxies, this release is solely based on plate data outside the galactic plane, i.e., | b| ≥slant 27^\circ . The resulting global zero point error is less than 0.6 mas yr-1, and the precision is better than 4.0 mas yr-1 for objects brighter than RF = 18.5, rising to 9.0 mas yr-1 for objects with magnitudes in the range 18.5 < RF < 20.0. The catalog covers 22,525 square degrees and lists 100,774,153 objects to the limiting magnitude of RF ∼ 20.8. Alignment with the International Celestial Reference System was made using 1288 objects common to the second realization of the International Celestial Reference Frame (ICRF2) at radio wavelengths. As a result, the coordinate axes realized by our astrometric data are believed to be aligned with the extragalactic radio frame to within ±0.2 mas at the reference epoch J2000.0. This makes our compilation one of the deepest and densest ICRF-registered astrometric catalogs outside the galactic plane. Although the Gaia mission is poised to set the new standard in catalog astronomy and will in many ways supersede this catalog, the methods and procedures reported here will prove useful to remove astrometric magnitude- and color-dependent systematic errors from the next generation of ground-based surveys reaching significantly deeper than the Gaia catalog. 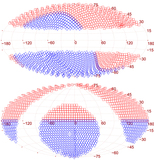