We present a new survey of HCN(1-0) emission, a tracer of dense molecular gas, focused on the little-explored regime of normal star-forming galaxy disks. Combining HCN, CO, and infrared (IR) emission, we investigate the role of dense gas in star formation, finding systematic variations in both the apparent dense gas fraction (traced by the HCN-to-CO ratio) and the apparent star formation efficiency of dense gas (traced by the IR-to-HCN ratio). The latter may be unexpected, given the recent popularity of gas density threshold models to explain star formation scaling relations. Our survey used the IRAM 30 m telescope to observe HCN(1-0), CO(1-0), and several other emission lines across 29 nearby disk galaxies whose CO(2-1) emission has previously been mapped by the HERACLES survey. We detected HCN in 48 out of 62 observed positions. Because our observations achieve a typical resolution of ∼1.5 kpc and span a range of galaxies and galactocentric radii (56% lie at {r}{gal}\gt 1 kpc), we are able to investigate the properties of the dense gas as a function of local conditions in a galaxy disk. We focus on how the ratios IR-to-CO, HCN-to-CO, and IR-to-HCN (observational cognates of the star formation efficiency, dense gas fraction, and dense gas star formation efficiency) depend on the stellar surface density, {{{Σ }}}{star}, and the molecular-to-atomic gas ratio, {{{Σ }}}{mol}/{{{Σ }}}{atom}. The HCN-to-CO ratio is low, often ∼1/30, and correlates tightly with both the molecular-to-atomic ratio and the stellar mass surface density across a range of 2.1 dex (factor of ≈125) in both parameters. Thus for the assumption of fixed CO-to-H2 and HCN-to-dense gas conversion factors, the dense gas fraction depends strongly on location in the disk, being higher in the high surface density, highly molecular parts of galaxies. At the same time, the IR-to-HCN ratio (closely related to the star formation efficiency of dense molecular gas) decreases systematically with these same parameters and is ∼6-8 times lower near galaxy centers than in the outer regions of the galaxy disks. For fixed conversion factors, these results are incompatible with a simple model in which star formation depends only on the amount of gas mass above some density threshold. Moreover, only a very specific set of environment-dependent conversion factors can render our observations compatible with such a model. Whole cloud models, such as the theory of turbulence regulated star formation, do a better job of matching our observations. We explore one such model in which variations in the Mach number drive many of the trends within galaxy disks, while density contrasts drive the differences between disk and merging galaxies.

Based on observations with the IRAM 30 m telescope. IRAM is supported by CNRS/INSU (France), the MPG (Germany), and the IGN (Spain). 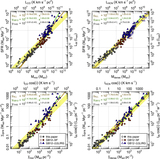