Tracking the Geysers of Enceladus into Saturn’s E Ring

We examine Cassini Imaging Science Subsystem images of the E ring taken over a period of almost 7 yr, from 2006 September to 2013 July, in which long, sinuous structures dubbed tendrils are present. We model these structures by numerically integrating the trajectories of particles launched from the sources of the most active geysers recently located along the four main fractures crossing the south polar terrain of the moon, and producing from these integrations synthetic images that we then compare to the real ones. We include the effects of charging and the electromagnetic forces on the particles in addition to the gravity of Saturn and Enceladus. We demonstrate that these structures are produced by the highest velocity particles erupting from the most active geysers and entering Saturn’s orbit, and not perturbations of E ring particles by Enceladus. The detailed structures of the tendrils change with the orbital position of Enceladus, a finding likely to be the result of the diurnal variability in the source activity. 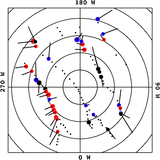