Planck intermediate results. XXVIII. Interstellar gas and dust in the Chamaeleon clouds as seen by Fermi LAT and Planck

The nearby Chamaeleon clouds have been observed in γ rays by the Fermi Large Area Telescope (LAT) and in thermal dust emission by Planck and IRAS. Cosmic rays and large dust grains, if smoothly mixed with gas, can jointly serve with the H i and 12CO radio data to (i) map the hydrogen column densities, NH, in the different gas phases, in particular at the dark neutral medium (DNM) transition between the H i-bright and CO-bright media; (ii) constrain the CO-to-H2 conversion factor, XCO; and (iii) probe the dust properties per gas nucleon in each phase and map their spatial variations across the clouds. We have separated clouds at local, intermediate, and Galactic velocities in H i and 12CO line emission to model in parallel the γ-ray intensity recorded between 0.4 and 100 GeV; the dust optical depth at 353 GHz, τ353; the thermal radiance of the large grains; and an estimate of the dust extinction, AVQ, empirically corrected for the starlight intensity. The dust and γ-ray models have been coupled to account for the DNM gas. The consistent γ-ray emissivity spectra recorded in the different phases confirm that the GeV-TeV cosmic rays probed by the LAT uniformly permeate all gas phases up to the 12CO cores. The dust and cosmic rays both reveal large amounts of DNM gas, with comparable spatial distributions and twice as much mass as in the CO-bright clouds. We give constraints on the H i-DNM-CO transitions for five separate clouds. CO-dark H2 dominates the molecular columns up to AV ≃ 0.9 and its mass often exceeds the one-third of the molecular mass expected by theory. The corrected AVQ extinction largely provides the best fit to the total gas traced by the γ rays. Nevertheless, we find evidence for a marked rise in AVQ/NH with increasing NH and molecular fraction, and with decreasing dust temperature. The rise in τ353/NH is even steeper. We observe variations of lesser amplitude and orderliness for the specific power of the grains, except for a coherent decline by half in the CO cores. This combined information suggests grain evolution. We provide average values for the dust properties per gas nucleon in the different phases. The γ rays and dust radiance yield consistent XCO estimates near 0.7 × 1020 cm-2 K-1 km-1 s. The AVQ and τ353 tracers yield biased values because of the large rise in grain opacity in the CO clouds. These results clarify a recurrent disparity in the γ-ray versus dust calibration of XCO, but they confirm the factor of 2 difference found between the XCO estimates in nearby clouds and in the neighbouring spiral arms. 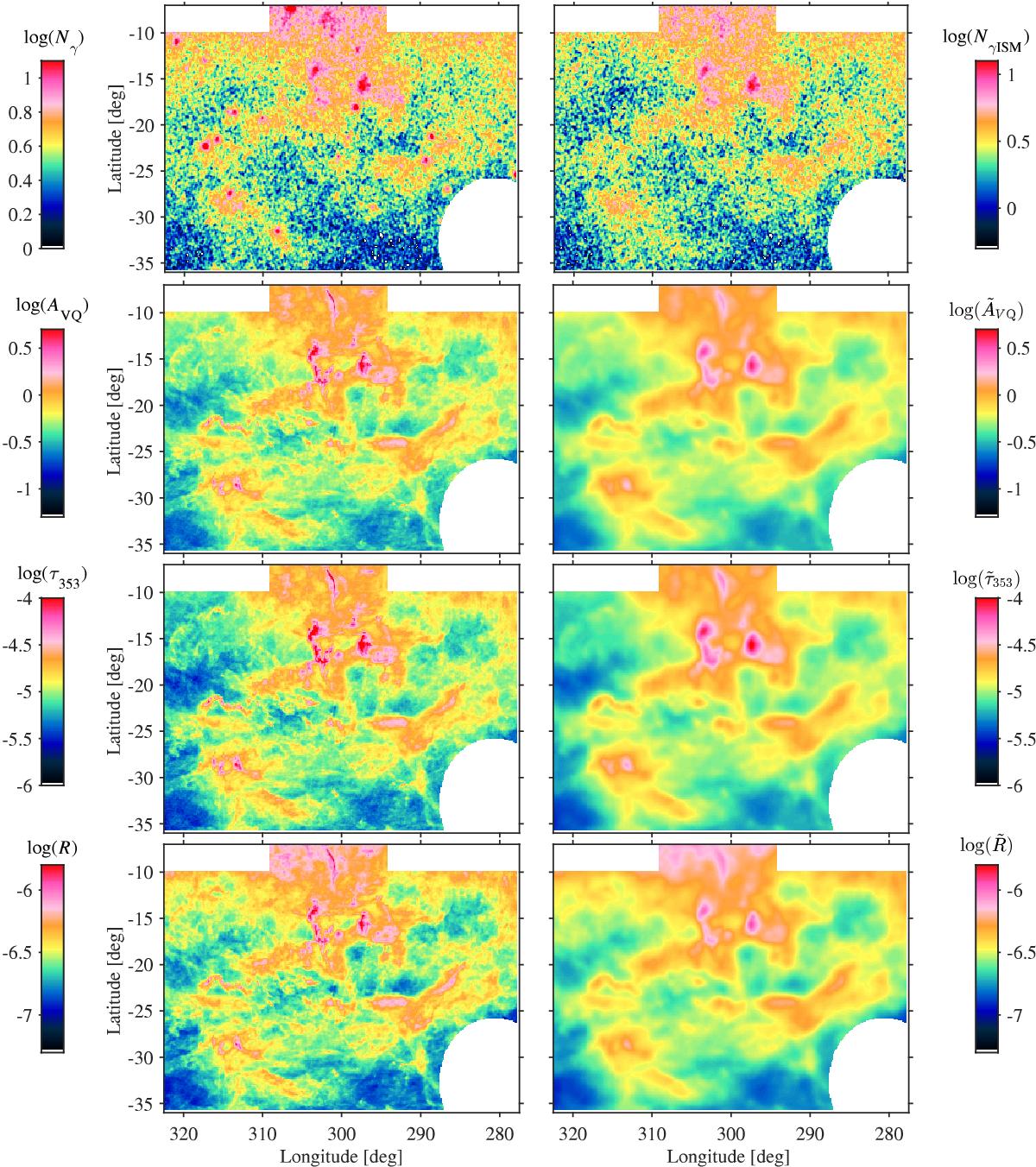