Context. The potentially hazardous asteroid (PHA) grazed Earth on January 26, 2015 at a distance of about 1.2 million km. This favorable geometry allowed observing it to derive its physical and dynamical parameters. (357439) 2004 BL86 was previously estimated to be a 500-m body. We study it also considering possible mechanisms that might mitigate the effect of asteroids that might become dangerous for Earth.
Aims: Physical and dynamical investigations of this peculiar object were performed to be able to characterize this object.
Methods: We used spectral observations obtained in the visible (V) using the Isaac Newton Telescope and in the near-infrared (NIR) using the InfraRed Telescope Facility. A complementary photometric survey during two nights was also provided by the Astronomical Observatory Cluj-Feleacu station in Romania. We anlyzed the data using reliable mathematical tools that were previously published under the acronym M4AST.
Results: VNIR spectral observations classify as V-type asteroid. The mineralogical analysis reveals its similarities to howardite-eucrite-diogenite meteorites. The band analysis reveals that the object is more similar to a eucritic and howarditic composition, and that it originated from the crust of a large parent body. The analysis yields a mineralogical solution of Wo17Fs39 with an error bar of 4%. Based on the average value of the thermal albedo for V-type objects, its diameter was re-estimated to a value of 290 ± 30 m. The dynamical analysis shows a chaotical behavior of . The statistics on meteorite falls show that does not appear to significantly contribute to the current howardite-eucrite-diogenite meteorite flux. For the two photometrical observing runs the following values of the rotational period and peak-to-peak amplitude were estimated for the light curves: 2.637 ± 0.024 h, 0.105 ± 0.007 mag, and 2.616 ± 0.061 h, 0.109 ± 0.018 mag, respectively. 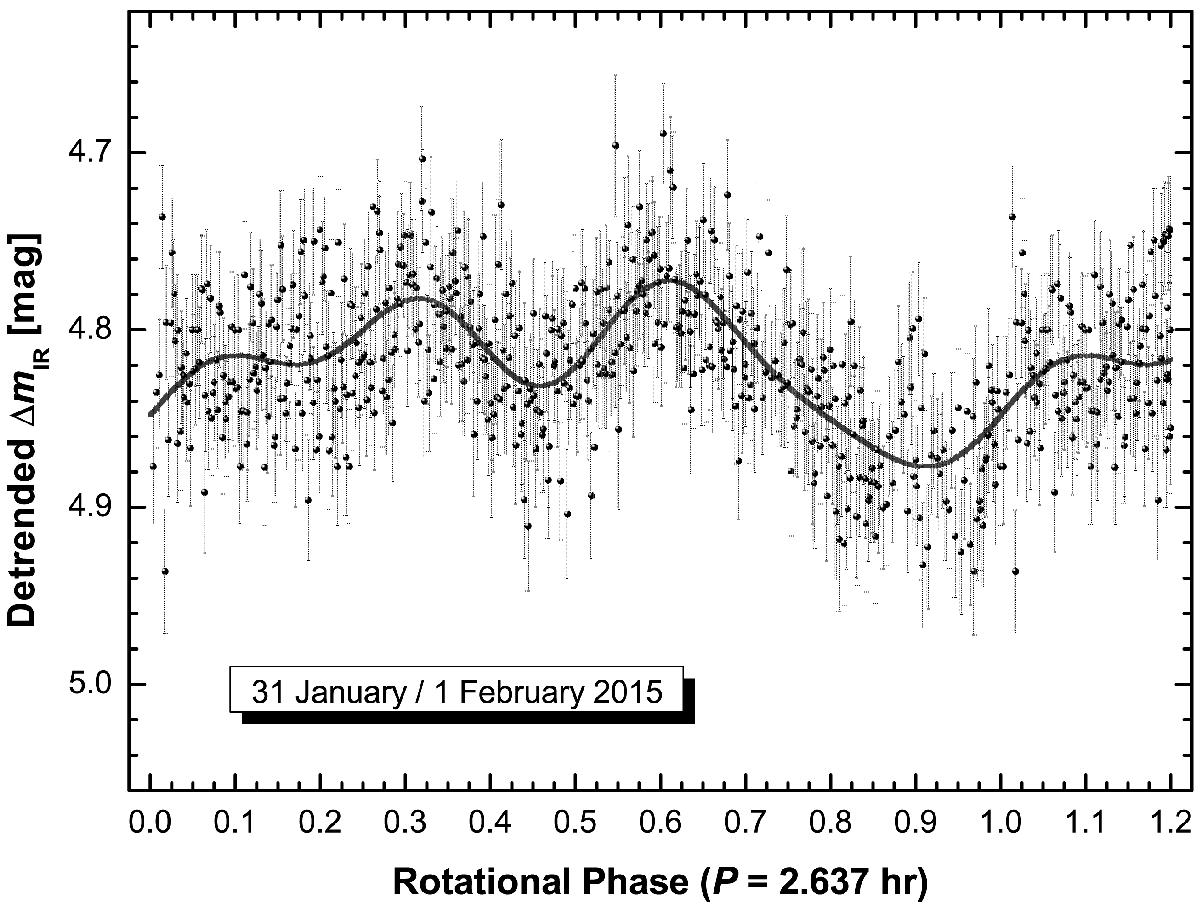