Stellar rotation, binarity, and lithium in the open cluster IC 4756

Context. An important aspect in the evolutionary scenario of cool stars is their rotation and the rotationally induced magnetic activity and interior mixing. Stars in open clusters are particularly useful tracers for these aspects because of their known ages.
Aims: We aim to characterize the open cluster IC 4756 and measure stellar rotation periods and surface differential rotation for a sample of its member stars.
Methods: Thirty-seven cluster stars were observed continuously with the CoRoT satellite for 78 days in 2010. Follow-up high-resolution spectroscopy of the CoRoT targets and deep Strömgren uvbyβ and Hα photometry of the entire cluster were obtained with our robotic STELLA facility and its echelle spectrograph and wide-field imager, respectively.
Results: We determined high-precision photometric periods for 27 of the 37 CoRoT targets and found values between 0.155 and 11.4 days. Twenty of these are rotation periods. Twelve targets are spectroscopic binaries of which 11 were previously unknown; orbits are given for six of them. Six targets were found that show evidence of differential rotation with ΔΩ/Ω in the range 0.04-0.15. Five stars are non-radially pulsating stars with fundamental periods of below 1 d, two stars are semi-contact binaries, and one target is a micro-flaring star that also shows rotational modulation. Nine stars in total were not considered members because of much redder color(s) and deviant radial velocities with respect to the cluster mean. Hα photometry indicates that the cluster ensemble does not contain magnetically over-active stars. The cluster average metallicity is -0.08 ± 0.06 (rms) and its logarithmic lithium abundance for 12 G-dwarf stars is 2.39 ± 0.17 (rms).
Conclusions: The cluster is 890 ± 70 Myrs old with an average turn-off mass of 1.8 M⊙ and a solar or slightly subsolar metallicity. The distance modulus is 8m.02 and the average reddening E(b - y) = 0m.16.. The cluster is masked by a very inhomogeneous foreground and background dust distribution and our survey covered 38% of the cluster. The average lithium abundance and the rotation periods in the range 1.7 to 11.4 d are consistent with the cluster age.

The CoRoT space mission has been developed and is operated by CNES, with the contribution of Austria, Belgium, Brazil, ESA (RSSD and Science Programme), Germany and Spain. Partly based on data obtained with the STELLA robotic observatory in Tenerife, an AIP facility jointly operated by AIP and IAC.Appendices are available in electronic form at http://www.aanda.org 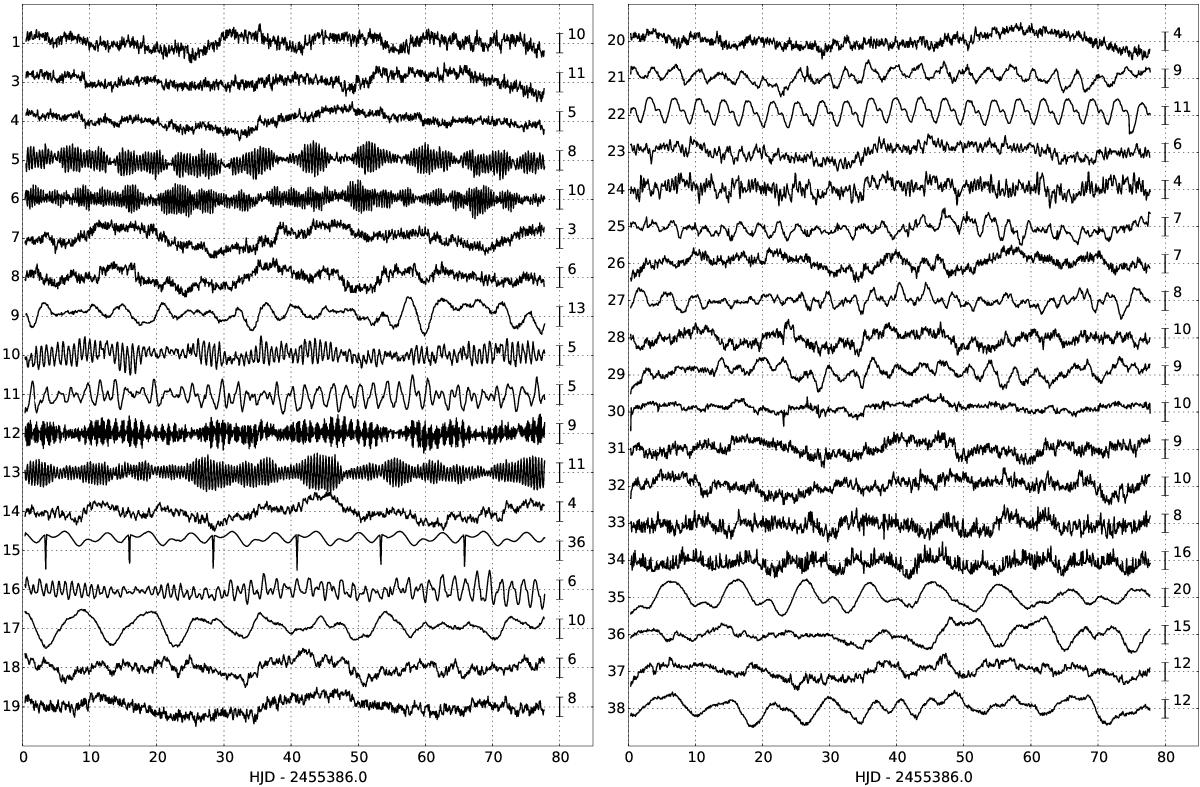