Velocity resolved [C ii], [C i], and CO observations of the N159 star-forming region in the Large Magellanic Cloud: a complex velocity structure and variation of the column densities

Context. The [C ii] 158 μm fine structure line is one of the dominant cooling lines in star-forming active regions. Together with models of photon-dominated regions, the data is used to constrain the physical properties of the emitting regions, such as the density and the radiation field strength. According to the modeling, the [C ii] 158 μm line integrated intensity compared to the CO emission is expected to be stronger in lower metallicity environments owing to lower dust shielding of the UV radiation, a trend that is also shown by spectral-unresolved observations. In the commonly assumed clumpy UV-penetrated cloud scenario, the models predict a [C ii] line profile similar to that of CO. However, recent spectral-resolved observations by Herschel/HIFI and SOFIA/GREAT (as well as the observations presented here) show that the velocity resolved line profile of the [C ii] emission is often very different from that of CO lines, indicating a more complex origin of the line emission including the dynamics of the source region.
Aims: The Large Magellanic Cloud (LMC) provides an excellent opportunity to study in great detail the physics of the interstellar medium (ISM) in a low-metallicity environment by spatially resolving individual star-forming regions. The aim of our study is to investigate the physical properties of the star-forming ISM in the LMC by separating the origin of the emission lines spatially and spectrally. In this paper, we focus on the spectral characteristics and the origin of the emission lines, and the phases of carbon-bearing species in the N159 star-forming region in the LMC.
Methods: We mapped a 4' × (3'-4') region in N159 in [C ii] 158 μm and [N ii] 205 μm with the GREAT instrument on board SOFIA. We also observed CO(3-2), (4-3), (6-5), 13CO(3-2), and [C i] 3P1-3P0 and 3P2-3P1 with APEX. All spectra are velocity resolved.
Results: The emission of all transitions observed shows a large variation in the line profiles across the map and in particular between the different species. At most positions the [C ii] emission line profile is substantially wider than that of CO and [C i]. We estimated the fraction of the [C ii] integrated line emission that cannot be fitted by the CO line profile to be 20% around the CO cores, and up to 50% at the area between the cores, indicating a gas component that has a much larger velocity dispersion than the ones probed by the CO and [C i] emission. We derived the relative contribution from C+, C, and CO to the column density in each velocity bin. The result clearly shows that the contribution from C+ dominates the velocity range far from the velocities traced by the dense molecular gas. Spatially, the region located between the CO cores of N159 W and E has a higher fraction of C+ over the whole velocity range. We estimate the contribution of the ionized gas to the [C ii] emission using the ratio to the [N ii] emission, and find that the ionized gas contributes ≤19% to the [C ii] emission at its peak position, and ≤15% over the whole observed region. Using the integrated line intensities, we present the spatial distribution of I[CII]/IFIR.
Conclusions: This study demonstrates that the [C ii] emission in the LMC N159 region shows significantly different velocity profiles from that of CO and [C i] emissions, emphasizing the importance of velocity resolved observations in order to distinguish different cloud components. 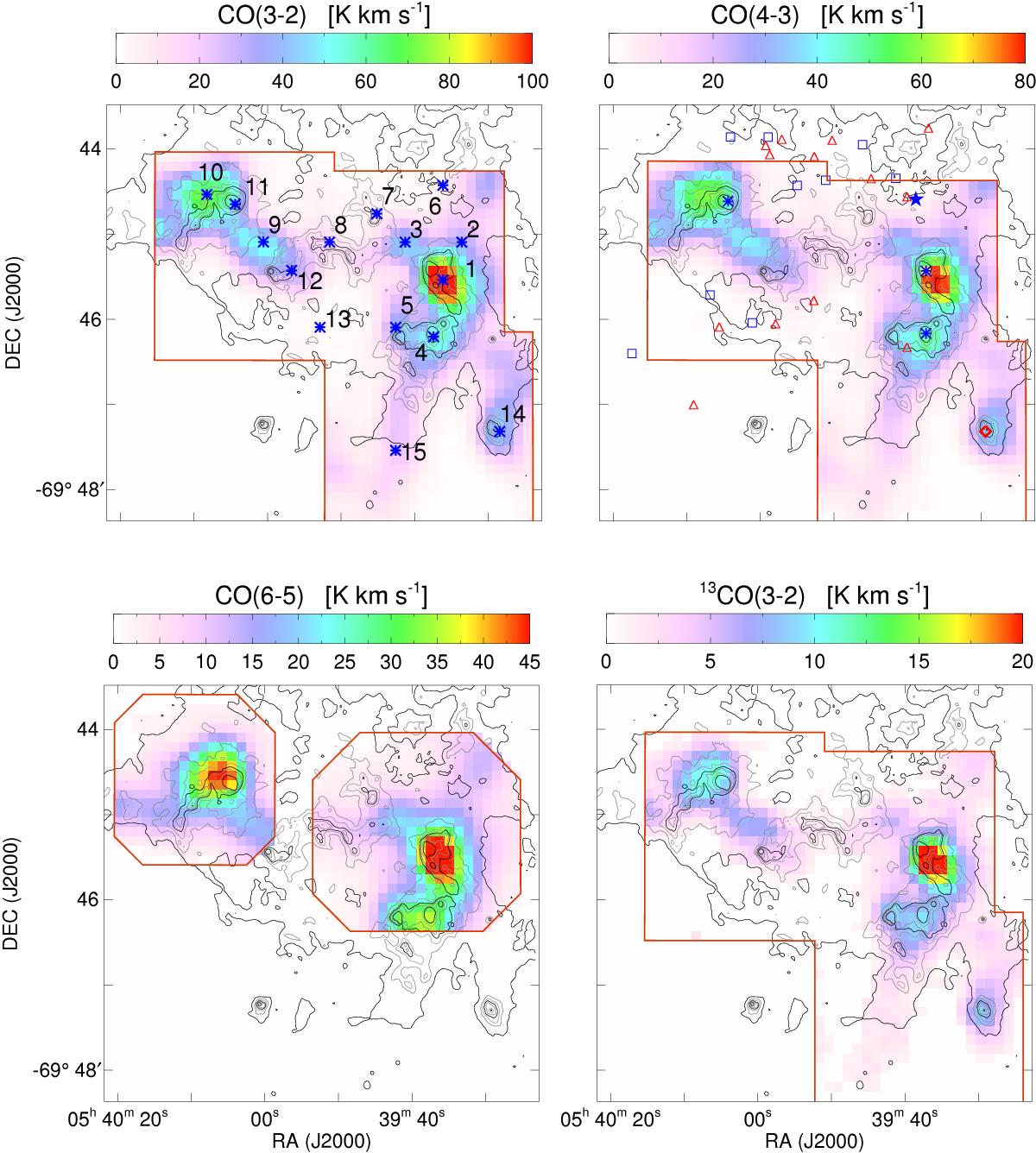