High-resolution imaging of the molecular outflows in two mergers: and

Context. Galaxy evolution scenarios predict that the feedback of star formation and nuclear activity (AGN) can drive the transformation of gas-rich spiral mergers into (ultra) luminous infrared galaxies and, eventually, lead to the build-up of QSO/elliptical hosts.
Aims: We study the role that star formation and AGN feedback have in launching and maintaining the molecular outflows in two starburst-dominated advanced mergers, (DL = 66 Mpc) and (DL = 181 Mpc), by analyzing the distribution and kinematics of their molecular gas reservoirs. Both galaxies present evidence of outflows in other phases of their ISM.
Methods: We used the Plateau de Bure interferometer (PdBI) to image the CO(1-0) and CO(2-1) line emissions in and , respectively, with high spatial resolution (0''̣5-1''̣2). The velocity fields of the gas were analyzed and modeled to find the evidence of molecular outflows in these sources and characterize the mass, momentum, and energy of these components.
Results: While most (≥95%) of the CO emission stems from spatially resolved (~2-3 kpc-diameter) rotating disks, we also detect in both mergers the emission from high-velocity line wings that extend up to ±500-700 km s-1, well beyond the estimated virial range associated with rotation and turbulence. The kinematic major axis of the line-wing emission is tilted by ~90° in and by ~180° in relative to the major axes of their respective rotating disks. These results can be explained by the existence of non-coplanar molecular outflows in both systems: the outflow axis is nearly perpendicular to the rotating disk in , but it is tilted relative to the angular momentum axis of the rotating disk in .
Conclusions: In stark contrast to , where star formation alone can drive its molecular outflow, the mass, energy, and momentum budget requirements of the molecular outflow in can be best accounted for by the existence of a so far undetected (hidden) AGN of LAGN ~ 7 × 1011 L☉. The geometry of the molecular outflow in suggests that the outflow is launched by a non-coplanar disk that may be associated with a buried AGN in the western nucleus.

Based on observations carried out with the IRAM Plateau de Bure Interferometer. IRAM is supported by INSU/CNRS (France), MPG (Germany), and IGN (Spain). 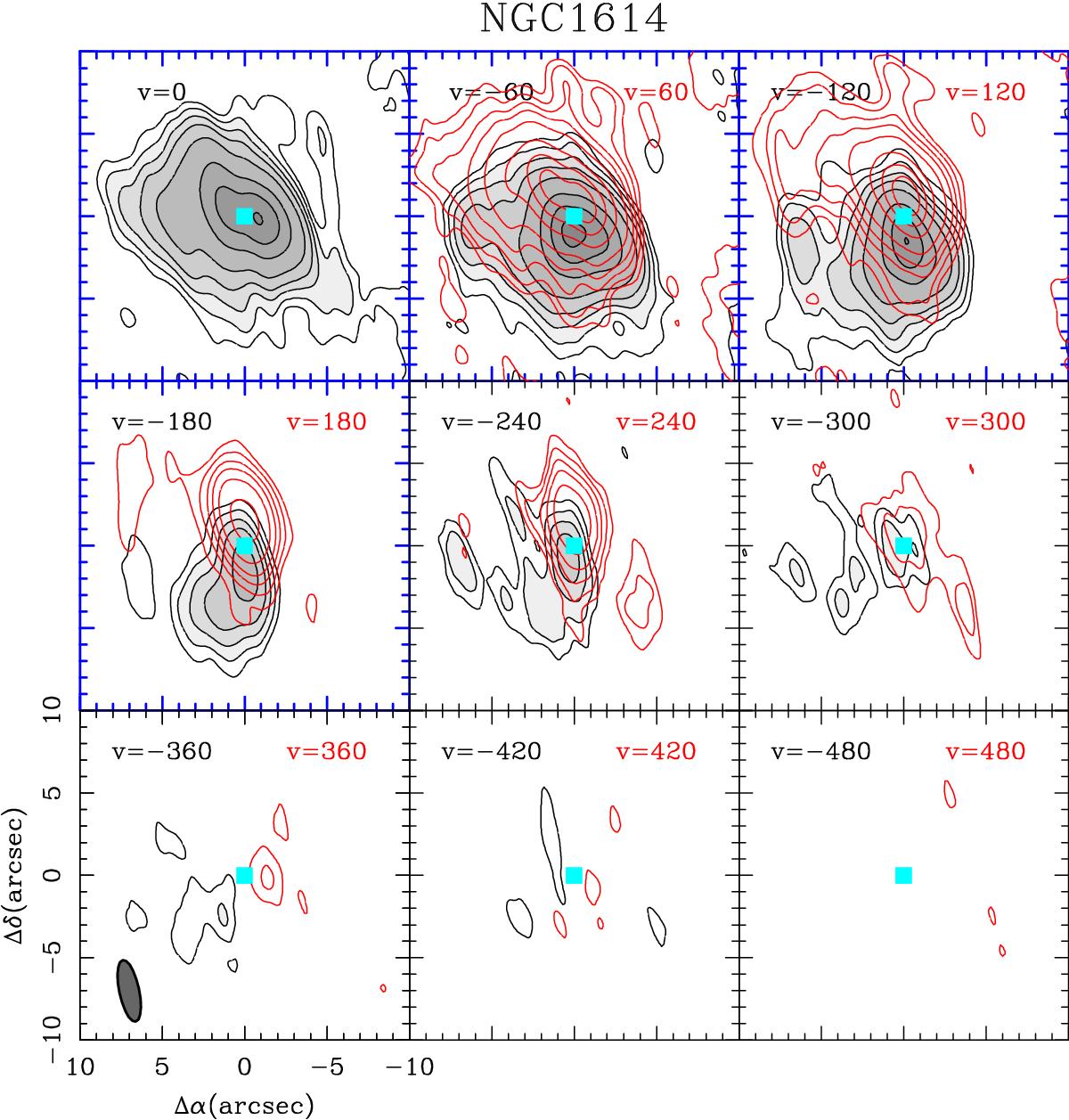