Nuclear obscuration in LINERs. Clues from Spitzer/IRS spectra on the Compton thickness and the existence of the dusty torus

Context. Most of the optically classified low-ionisation, narrow emission-line regions (LINERs) nuclei host an active galactic nucleus (AGN). However, how they fit into the unified model (UM) of AGN is still an open question.
Aims: The aims of this work are to study at mid-infrared (mid-IR) (1) the Compton-thick nature of LINERs (i.e. hydrogen column densities of NH> 1.5 × 1024 cm-2) and (2) the disappearance of the dusty torus in LINERs predicted from theoretical arguments.
Methods: We have compiled all the available low spectral-resolution, mid-IR spectra of LINERs from the InfraRed Spectrograph (IRS) onboard Spitzer. The sample contains 40 LINERs. We have complemented the LINER sample with Spitzer/IRS spectra of PG QSOs, Type-1 Seyferts (S1s), Type-2 Seyferts (S2s), and StarBurst (SB) nuclei. We studied the AGN compared to the starburst content in our sample using different indicators: the equivalent width of the polycyclic aromatic hydrocarbon at 6.2 μm, the strength of the silicate feature at 9.7 μm, and the steepness of the mid-IR spectra. We classified the spectra as SB-dominated and AGN-dominated, according to these diagnostics and compared the average mid-IR spectra of the various classes. Moreover, we studied the correlation between the 12 μm luminosity, νLν(12 μm), and the 2-10 keV energy band X-ray luminosity, LX(2-10 keV).
Results: In 25 out of the 40 LINERs (i.e. 62.5%), the mid-IR spectra are not SB-dominated, similar to the comparison S2 sample (67.7%). The average spectra of both SB-dominated LINERs and S2s are very similar to the average spectrum of the SB class. The average spectrum of AGN-dominated LINERs is different from the average spectra of the other optical classes, showing a rather flat spectrum at 6-28 μm. We find that the average spectrum of AGN-dominated LINERs with X-ray luminosities LX(2-10 keV) > 1041 erg/s is similar to the average mid-IR spectrum of AGN-dominated S2s. However, faint LINERs (i.e. LX(2-10 keV) < 1041 erg/s) show flat spectra different from any of the other optical classes. The correlation between νLν(12 μm) and LX(2-10 keV) for AGN nicely extends towards low luminosities only if SB-dominated LINERs are excluded and if the 2-10 keV band X-ray luminosity is corrected in Compton-thick LINER candidates.
Conclusions: We find that LINERs proposed as Compton-thick candidates at X-ray wavelengths may be confirmed according to the X-ray to mid-IR luminosity relation. We show evidence that the dusty-torus disappear when their bolometric luminosity is below Lbol ≃ 1042 erg/s. We suggest that the dominant emission at mid-IR of faint LINERs might be a combination of an elliptical galaxy host (characterised by the lack of gas), a starburst, a jet, and/or ADAF emission. Alternatively, the mid-IR emission of some of these faint LINERs could be a combination of elliptical galaxy plus carbon-rich planetary nebulae. To reconcile the Compton-thick nature of a large number of LINERs without dusty-torus signatures, we suggest that the material producing the Compton-thick X-ray obscuration is free of dust. 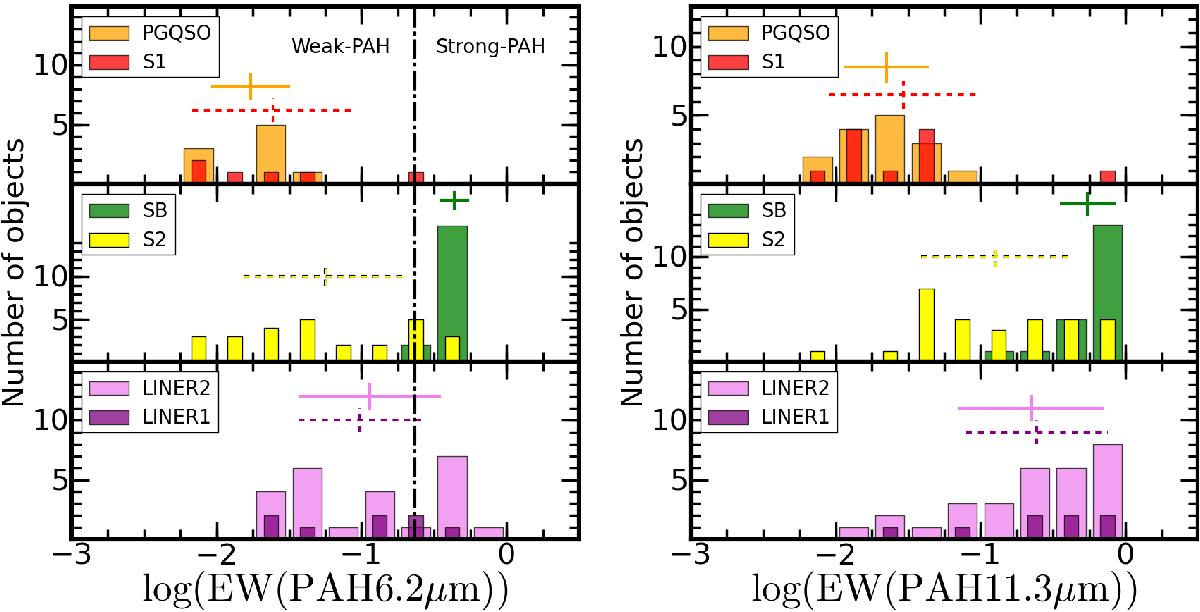