The Herschel Dwarf Galaxy Survey. I. Properties of the low-metallicity ISM from PACS spectroscopy

Context. The far-infrared (FIR) lines are important tracers of the cooling and physical conditions of the interstellar medium (ISM) and are rapidly becoming workhorse diagnostics for galaxies throughout the universe. There are clear indications of a different behavior of these lines at low metallicity that needs to be explored.
Aims: Our goal is to explain the main differences and trends observed in the FIR line emission of dwarf galaxies compared to more metal-rich galaxies, and how this translates in ISM properties.
Methods: We present Herschel/PACS spectroscopic observations of the [C ii] 157 μm, [O i] 63 and 145 μm, [O iii] 88 μm, [N ii] 122 and 205 μm, and [N iii] 57 μm fine-structure cooling lines in a sample of 48 low-metallicity star-forming galaxies of the guaranteed time key program Dwarf Galaxy Survey. We correlate PACS line ratios and line-to-LTIR ratios with LTIR, LTIR/LB, metallicity, and FIR color, and interpret the observed trends in terms of ISM conditions and phase filling factors with Cloudy radiative transfer models.
Results: We find that the FIR lines together account for up to 3 percent of LTIR and that star-forming regions dominate the overall emission in dwarf galaxies. Compared to metal-rich galaxies, the ratios of [O iii]88/[N ii]122 and [N iii]57/[N ii]122 are high, indicative of hard radiation fields. In the photodissociation region (PDR), the [C ii]157/[O i]63 ratio is slightly higher than in metal-rich galaxies, with a small increase with metallicity, and the [O i]145/[O i]63 ratio is generally lower than 0.1, demonstrating that optical depth effects should be small on the scales probed. The [O iii]88/[O i]63 ratio can be used as an indicator of the ionized gas/PDR filling factor, and is found to be ~4 times higher in the dwarfs than in metal-rich galaxies. The high [C ii]/LTIR, [O i]/LTIR, and [O iii]/LTIR ratios, which decrease with increasing LTIR and LTIR/LB, are interpreted as a combination of moderate far-UV fields and a low PDR covering factor. Harboring compact phases of a low filling factor and a large volume filling factor of diffuse gas, the ISM of low-metallicity dwarf galaxies has a more porous structure than that of metal-rich galaxies.

Herschel is an ESA space observatory with science instruments provided by European-led Principal Investigator consortia and with important participation from NASA.Table 4 and Appendices are available in electronic form at http://www.aanda.orgTable 4 is also available at the CDS via anonymous ftp to http://cdsarc.u-strasbg.fr (ftp://130.79.128.5) or via http://cdsarc.u-strasbg.fr/viz-bin/qcat?J/A+A/578/A53 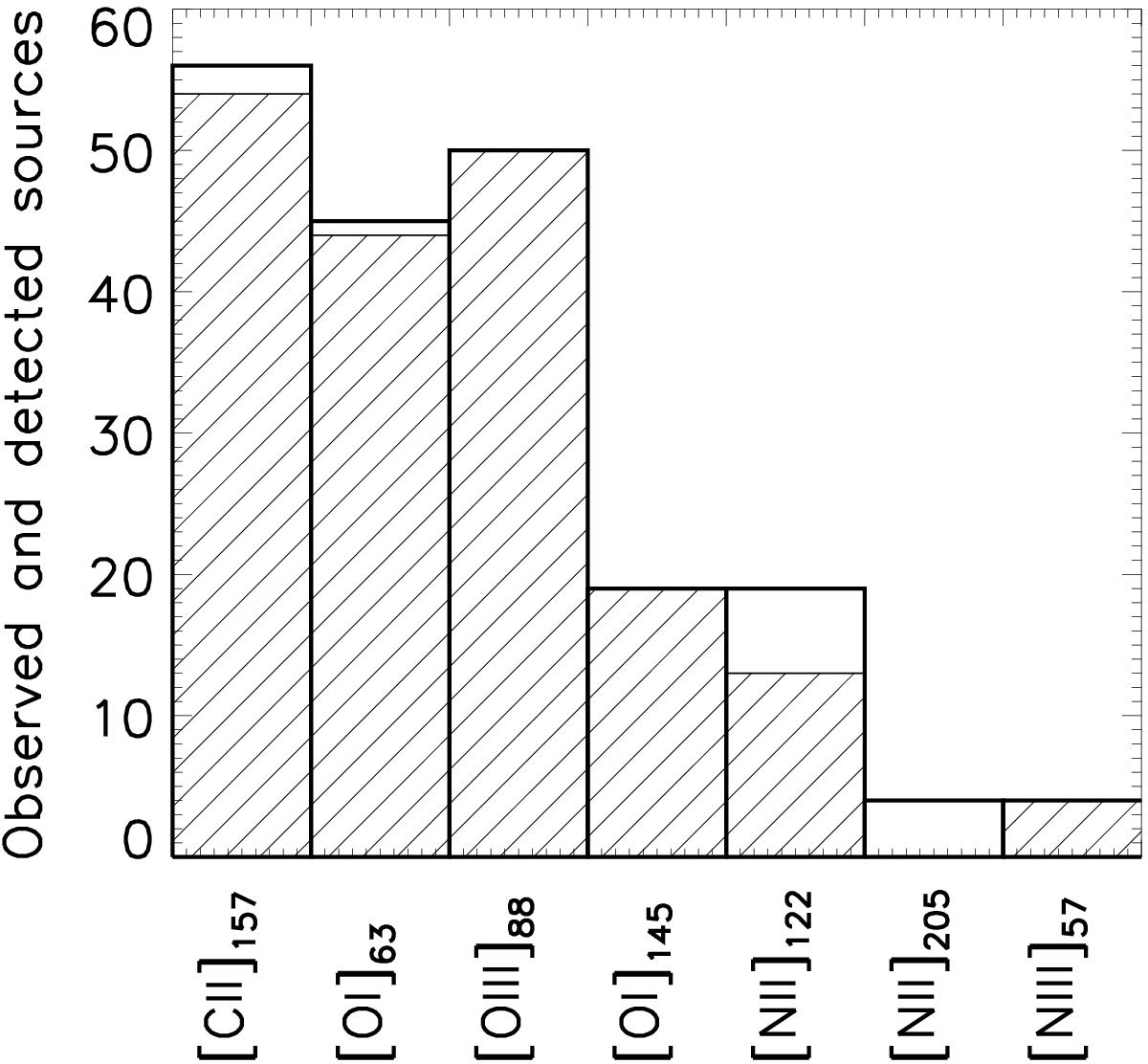