Aims: The quasar S4 0917+624 is one of the targets in the Urumqi flux density monitoring program, which aims to study the properties of intra-day variable (IDV) extragalactic radio sources.
Methods: The IDV observations of S4 0917+624 were carried out monthly, from August 2005 to January 2010, with the Urumqi 25 m radio telescope at 4.8 GHz. We analyze these and previous IDV observations to investigate the long-term IDV characteristics of S4 0917+624. We also study the long-term structural variability on milliarcsecond scales using VLBI maps obtained at 15 GHz (taken from the MOJAVE database) in order to search for a possible relation between variations in the IDV pattern and the source structure.
Results: The quasar S4 0917+624 exhibits only very weak or no IDV during our 4.5 year observing interval. Prior to the year 2000, the source S4 0917+624 was one of the most prominent IDV sources. Our new data indicate that the previous strong IDV has ceased. We analyzed the long-term VLBI structural variability using Gaussian model-fitting. From this we obtained the flux densities and the deconvolved sizes of core and inner-jet components of the source. We studied the properties such as core fraction, angular size, spectral index, and brightness temperature of VLBI core for S4 0917+624, as well as the time delay between 5 and 15 GHz variations, and compared them with the IDV properties of S4 0917+624. The source shows ejection of several jet components that are suspected to have partially reduced the IDV amplitude of S4 0917+624. However, during 2005-2006, the VLBI core size was comparable to the size before the year 2000, but no strong IDV was detected in the period, suggesting that the quenching effect due to source size changes may not be responsible for the lack of strong IDV after the year 2000. The refractive scattering properties for the strong IDV phase of S4 0917+624 before the year 2000 are discussed.
Conclusions: The disappearance of strong IDV in S4 0917+624 after the year 2000 is a mystery and cannot be explained via the quenching effect by changes in the observable VLBI structure. However, it may be caused by changes in the interstellar medium, i.e. by interstellar weather, which induces changes in the scintillation pattern on timescales of several years. Further coordinated multi-frequency observations will be required to distinguish between the effect of source-intrinsic variability and changing properties of the interstellar medium.

Table 1 and Appendix A are available in electronic form at http://www.aanda.org 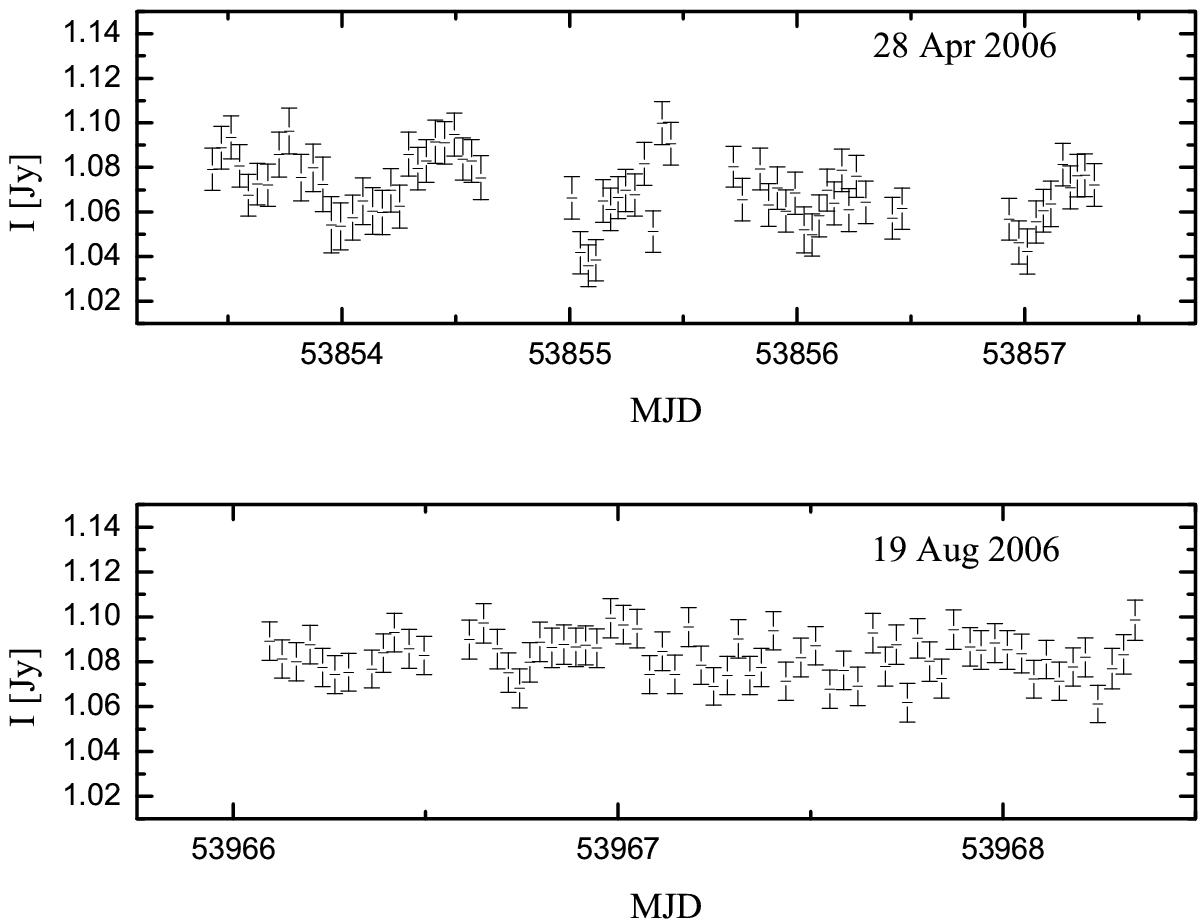