New constraints on the dust surrounding HR 4796A

Context. HR 4796A is surrounded by a well-structured and very bright circumstellar disc shaped like an annulus with many interesting features: very sharp inner and outer edges, brightness asymmetries, centre offset, and suspected distortions in the ring.
Aims: We aim to constrain the properties of the dust surrounding the star HR 4796A, in particular the grain size and composition. We also want to confirm and refine the morphological parameters derived from previous scattered light observations, and reveal the dust spatial extent in regions unexplored so far due to their proximity to the star.
Methods: We have obtained new images in polarised light of the binary system HR 4796A and B in the Ks and L' band with the NaCo instrument at the Very Large Telescope (VLT). In addition, we revisit two archival data sets obtained in the L' band with that same instrument and at 2.2 μm with the NICMOS instrument on the Hubble Space Telescope. We analyse these observations with simulations using the radiative transfer code MCFOST to investigate the dust properties. We explore a grid of models with various dust compositions and sizes in a Bayesian approach.
Results: We detect the disc in polarised light in the Ks band and reveal for the first time the innermost regions down to 0.3″ along the semi-minor axis. We measure a polarised fraction of 29% ± 8% in the two disc ansae, with a maximum occurring more than 13° westwards from the ansae. A very pronounced brightness asymmetry between the north-west and south-east side is detected. This contradicts the asymmetry previously reported in all images of the disc in unpolarised light at wavelengths smaller than or equal to 2.2 μm and is inconsistent with the predicted scattered light from spherical grains using the Mie theory. Our modelling suggests the north-west side is most likely inclined towards the Earth, contrary to previous conclusions. It shows that the dust is composed of porous aggregates larger than 1 μm. 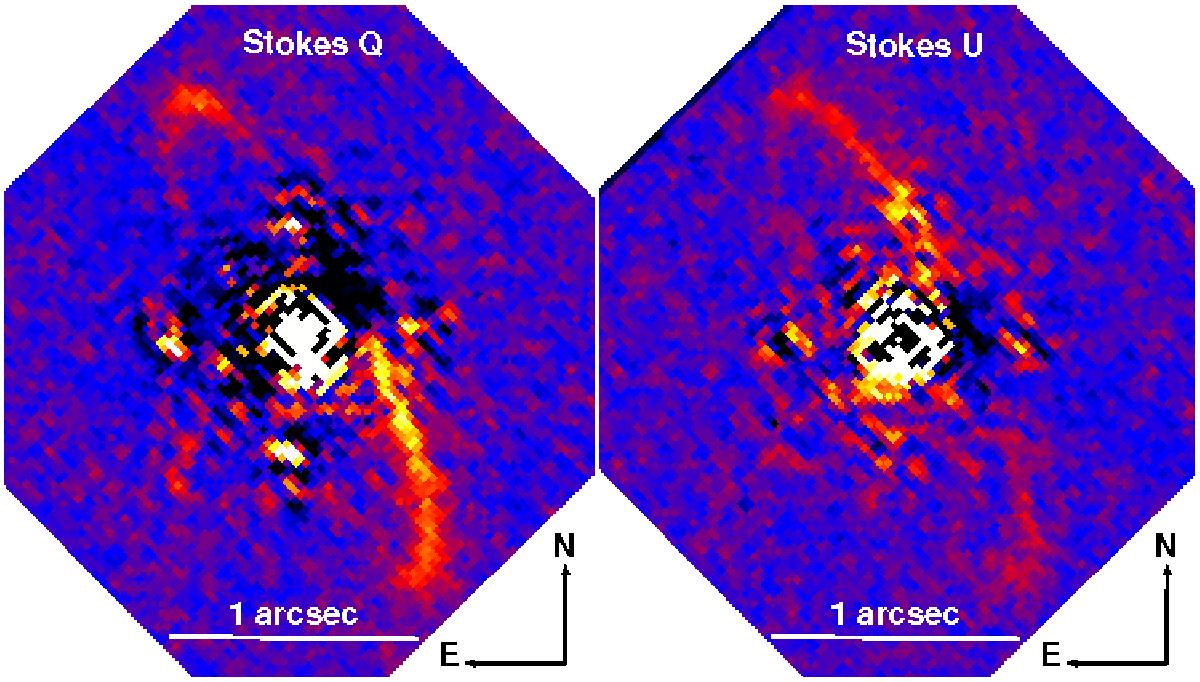