Context. Accurate and repeated photometric follow-up observations of planetary transit events are important to precisely characterize the physical properties of exoplanets. A good knowledge of the main characteristics of the exoplanets is fundamental in order to trace their origin and evolution. Multi-band photometric observations play an important role in this process.
Aims: By using new photometric data, we computed precise estimates of the physical properties of two transiting planetary systems at equilibrium temperatures of ~2000 K.
Methods: We present new broadband, multi-colour photometric observations obtained using three small class telescopes and the telescope-defocussing technique. In particular we obtained 11 and 10 light curves covering 8 and 7 transits of HAT-P-23 and WASP-48, respectively. For each of the two targets, one transit event was simultaneously observed through four optical filters. One transit of WASP-48 b was monitored with two telescopes from the same observatory. The physical parameters of the systems were obtained by fitting the transit light curves with jktebop and from published spectroscopic measurements.
Results: We have revised the physical parameters of the two planetary systems, finding a smaller radius for both HAT-P-23 b and WASP-48 b, Rb = 1.224 ± 0.037 RJup and Rb = 1.396 ± 0.051 RJup, respectively, than those measured in the discovery papers (Rb = 1.368 ± 0.090 RJup and Rb = 1.67 ± 0.10 RJup). The density of the two planets are higher than those previously published (ρb ~ 1.1 and ~0.3 ρjup for HAT-P-23 and WASP-48, respectively) hence the two hot Jupiters are no longer located in a parameter space region of highly inflated planets. An analysis of the variation of the planet's measured radius as a function of optical wavelength reveals flat transmission spectra within the experimental uncertainties. We also confirm the presence of the eclipsing contact binary NSVS-3071474 in the same field of view of WASP-48, for which we refine the value of the period to be 0.459 d. 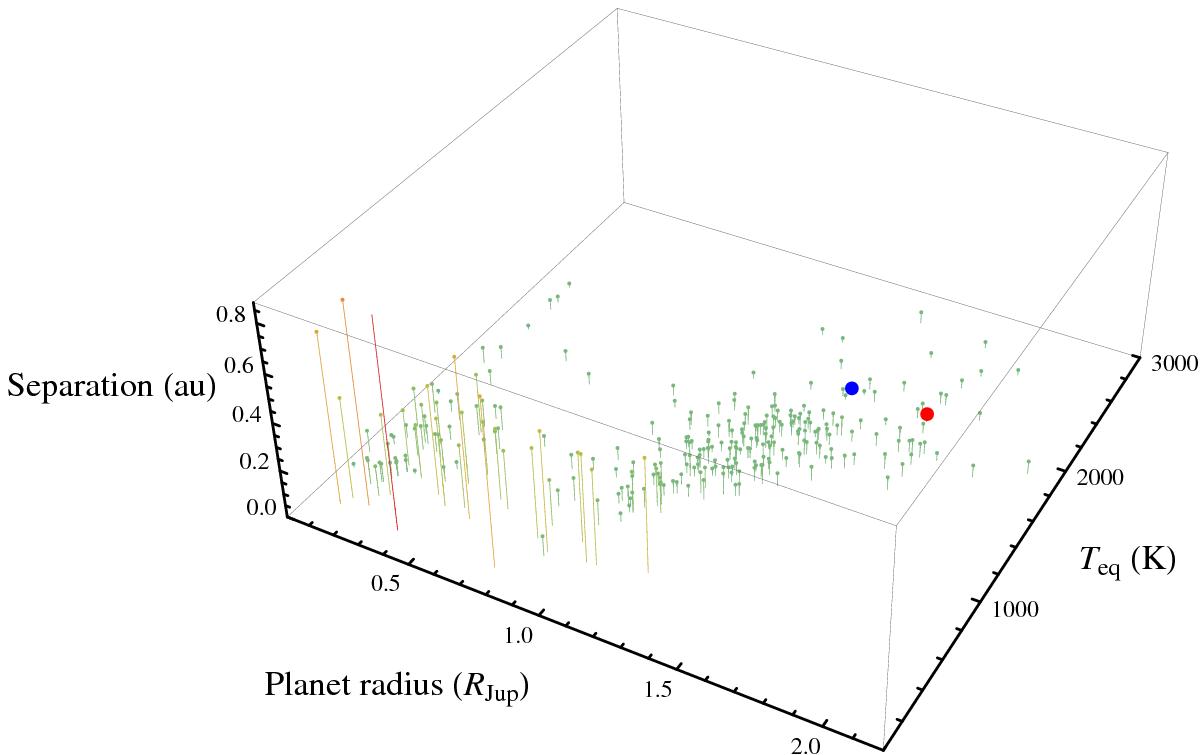