Ionized gas at the edge of the central molecular zone

Context. The edge of the central molecular zone (CMZ) is the location where massive dense molecular clouds with large internal velocity dispersions transition to the surrounding more quiescent and lower CO emissivity region of the Galaxy. Little is known about the ionized gas surrounding the molecular clouds and in the transition region.
Aims: We determine the properties of the ionized gas at the edge of the CMZ near Sgr E using observations of N+ and C+.
Methods: We observed a small portion of the edge of the CMZ near Sgr E with spectrally resolved [C ii] 158 μm and [N ii] 205 μm fine structure lines at six positions with the GREAT instrument on SOFIA and in [C ii] using Herschel HIFI on-the-fly strip maps. We use the [N ii] spectra along with a radiative transfer model to calculate the electron density of the gas and the [C ii] maps to illuminate the morphology of the ionized gas and model the column density of CO-dark H2.
Results: We detect two [C ii] and [N ii] velocity components, one along the line of sight to a CO molecular cloud at - 207 km s-1 associated with Sgr E and the other at -174 km s-1 outside the edge of another CO cloud. From the [N ii] emission we find that the average electron density is in the range of ~5 to 21 cm-3 for these features. This electron density is much higher than that of the disk's warm ionized medium, but is consistent with densities determined for bright diffuse H ii nebula. The column density of the CO-dark H2 layer in the -207 km s-1 cloud is ~1-2 × 1021 cm-2 in agreement with theoretical models. The CMZ extends further out in Galactic radius by ~7 to 14 pc in ionized gas than it does in molecular gas traced by CO.
Conclusions: The edge of the CMZ likely contains dense hot ionized gas surrounding the neutral molecular material. The high fractional abundance of N+ and high electron density require an intense EUV field with a photon flux of order 106 to 107 photons cm-2 s-1, and/or efficient proton charge exchange with nitrogen, at temperatures of order 104 K, and/or a large flux of X-rays. Sgr E is a region of massive star formation as indicated by the presence of numerous compact H ii regions. The massive stars are potential sources of the EUV radiation that ionizes and heat the gas. In addition, X-ray sources and the diffuse X-ray emission in the CMZ are candidates for ionizing nitrogen. 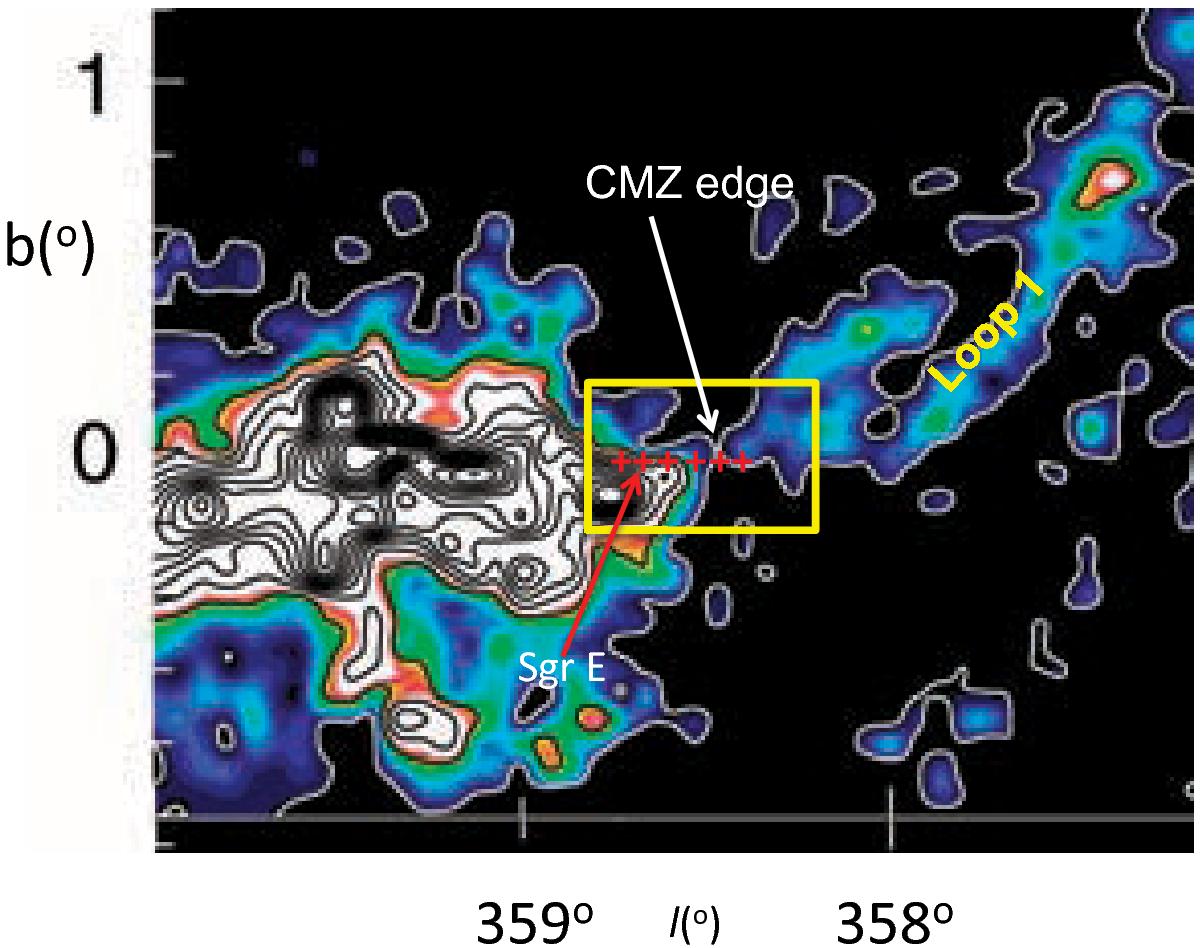