Context. A rich phenomenology has been accumulated over the years regarding accretion and ejection in black-hole X-ray transients (BHTs) and it needs an interpretation.
Aims: Here we summarize the current observational picture of the outbursts of BHTs, based on the evolution traced in a hardness-luminosity diagram (HLD), and we offer a physical interpretation.
Methods: The basic ingredient in our interpretation is the Poynting-Robertson cosmic battery (PRCB), which provides locally the poloidal magnetic field needed for the ejection of the jet. In addition, we make two assumptions, easily justifiable. The first is that the mass-accretion rate to the black hole in a BHT outburst has a generic bell-shaped form, whose characteristic time scale is much longer than the dynamical or the cooling ones. This is guaranteed by the observational fact that all BHTs start their outburst and end it at the quiescent state, i.e., at very low accretion rate, and that state transitions take place over long time scales (hours to days). The second assumption is that at low accretion rates the accretion flow is geometrically thick, ADAF-like, while at high accretion rates it is geometrically thin. Last, but not least, we demonstrate that the previous history of the system is absolutely necessary for the interpretation of the HLD.
Results: Both, at the beginning and the end of an outburst, the PRCB establishes a strong poloidal magnetic field in the ADAF-like part of the accretion flow, and this explains naturally why a jet is always present in the right part of the HLD. In the left part of the HLD, the accretion flow is in the form of a thin disk, and such a disk cannot sustain a strong poloidal magnetic filed. Thus, no jet is expected in this part of the HLD. Finally, the counterclockwise traversal of the HLD is explained as follows: all outbursts start from the quiescent state, in which the inner part of the accretion flow is ADAF-like, threaded by a poloidal magnetic field. As the accretion rate increases and the source moves to the hard state, the poloidal magnetic field in the ADAF forces the flow to remain ADAF and the source to move upwards in the HLD rather than to turn left. Thus, the history of the system determines the counterclockwise traversal of the HLD. As a result, no BHT is expected to ever traverse the entire HLD curve in the clockwise direction.
Conclusions: We offer a physical interpretation of accretion and ejection in BHTs with only one parameter, the mass transfer rate, plus the history of the system. 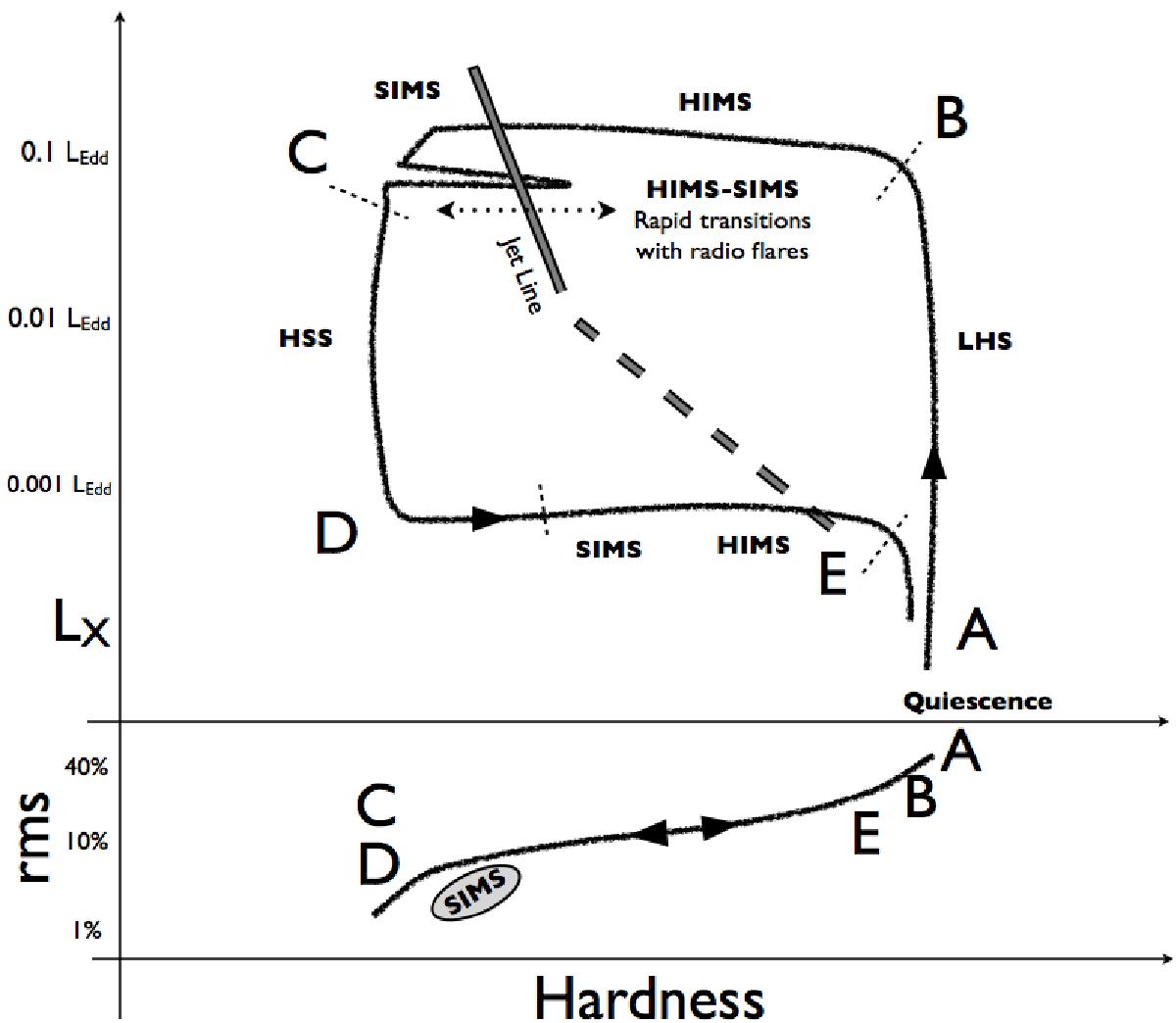