Aims: We study the emission and absorption of CO ro-vibrational lines in the spectra of intermediate mass pre-main-sequence stars with the aim to determine both the spatial distribution of the CO gas and its physical properties. We also aim to correlate CO emission properties with disk geometry.
Methods: Using high-resolution spectra containing fundamental and first overtone CO ro-vibrational emission, observed with CRIRES on the VLT, we probe the physical properties of the circumstellar gas by studying its kinematics and excitation conditions.
Results: We detect and spectrally resolve CO fundamental ro-vibrational emission in 12 of the 13 stars observed, and in two cases in absorption.
Conclusions: Keeping in mind that we studied a limited sample, we find that the physical properties and spatial distribution of the CO gas correlate with disk geometry. Flaring disks show highly excited CO fundamental emission up to vu = 5, while self-shadowed disks show CO emission that is not as highly excited. Rotational temperatures range between 250-2000 K. The 13CO rotational temperatures are lower than those of 12CO. The vibrational temperatures in self-shadowed disks are similar to or slightly below the rotational temperatures, suggesting that thermal excitation or IR pumping is important in these lines. In flaring disks the vibrational temperatures reach as high as 6000 K, suggesting fluorescent pumping. Using a simple kinematic model we show that the CO inner radius of the emitting region is ≈10 au for flaring disks and ≤1 au for self-shadowed disks. Comparison with hot dust and other gas tracers shows that CO emission from the disks around Herbig Ae/Be stars, in contrast to T Tauri stars, does not necessarily trace the circumstellar disk up to, or inside the dust sublimation radius, Rsubl. Rather, the onset of the CO emission starts from ≈Rsubl for self-shadowed disks, to tens of Rsubl for flaring disks. It has recently been postulated that group I Herbig stars may be transitional disks and have gaps. Our CO observations are qualitatively in agreement with this picture. We identify the location of the CO emission in these group I disks with the inner rim of the outer disk after such a gap, and suggest that the presence of highly vibrationally excited CO emission and a mismatch between the rotational and vibrational temperature may be a proxy for the presence of moderately sized disk gaps in Herbig Ae/Be disks.

Based on observations collected at the European Southern Observatory, Paranal, Chile (Program IDs 079.C-0349(A) and 081.C-0833(A)).Appendices are available in electronic form at http://www.aanda.org 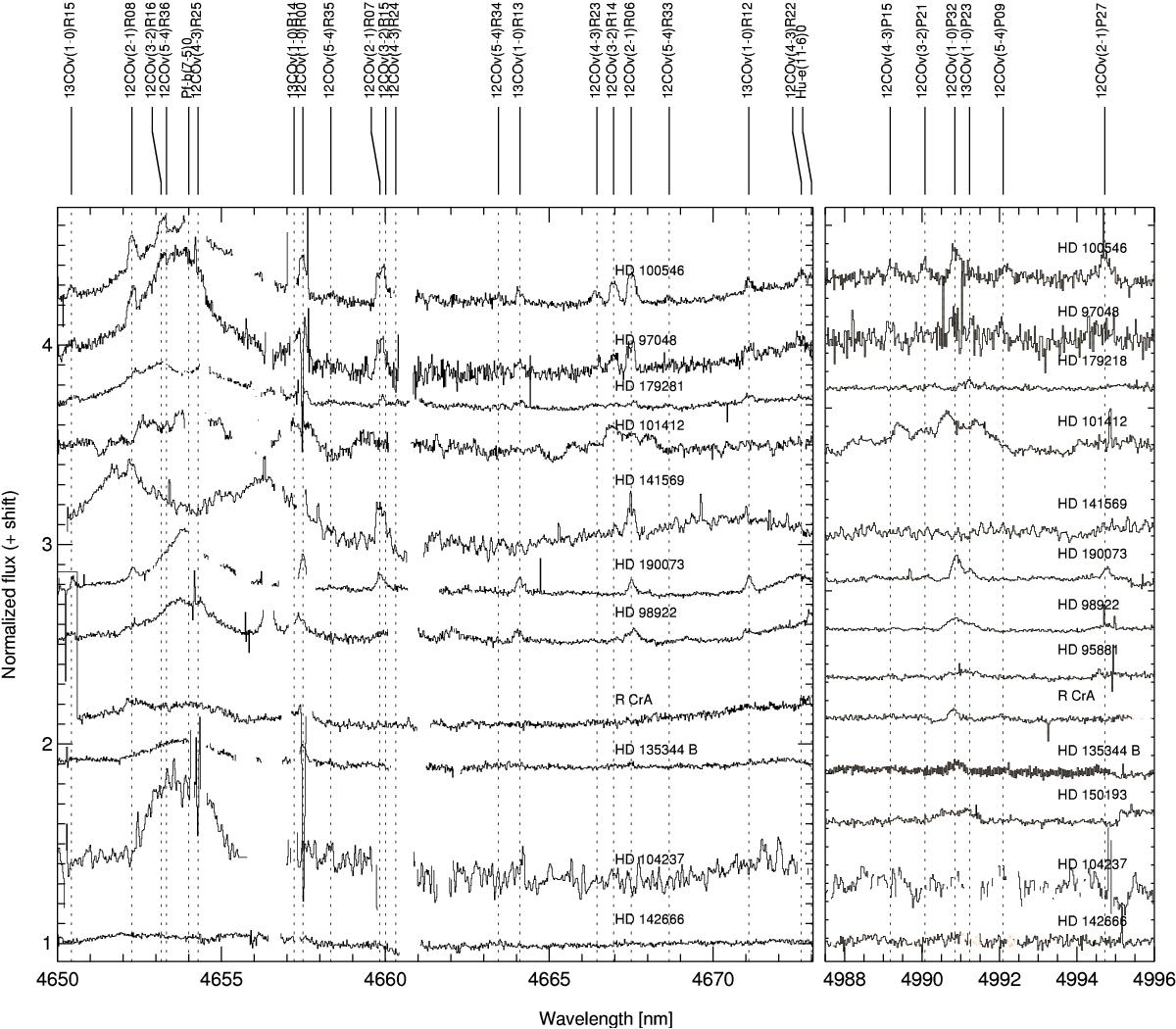