Aims: We present fundamental stellar parameters, chemical abundances, and rotational velocities for a sample of 86 evolved stars with planets (56 giants; 30 subgiants), and for a control sample of 137 stars (101 giants; 36 subgiants) without planets. The analysis was based on both high signal-to-noise and resolution echelle spectra. The main goals of this work are i) to investigate chemical differences between evolved stars that host planets and those of the control sample without planets; ii) to explore potential differences between the properties of the planets around giants and subgiants; and iii) to search for possible correlations between these properties and the chemical abundances of their host stars. Implications for the scenarios of planet formation and evolution are also discussed.
Methods: The fundamental stellar parameters (Teff, log g, [Fe/H], ξt) were computed homogeneously using the FUNDPAR code. The chemical abundances of 14 elements (Na, Mg, Al, Si, Ca, Sc, Ti, V, Cr, Mn, Co, Ni, Zn, and Ba) were obtained using the MOOG code. Rotational velocities were derived from the full width at half maximum of iron isolated lines.
Results: In agreement with previous studies, we find that subgiants with planets are, on average, more metal-rich than subgiants without planets by ~0.16 dex. The [Fe/H] distribution of giants with planets is centered at slightly subsolar metallicities and there is no metallicity enhancement relative to the [Fe/H] distribution of giants without planets. Furthermore, contrary to recent results, we do not find any clear difference between the metallicity distributions of stars with and without planets for giants with M⋆> 1.5 M☉. With regard to the other chemical elements, the analysis of the [X/Fe] distributions shows differences between giants with and without planets for some elements, particularly V, Co, and Ba. Subgiants with and without planets exhibit similar behavior for most of the elements. On the other hand, we find no evidence of rapid rotation among the giants with planets or among the giants without planets. Finally, analyzing the planet properties, some interesting trends might be emerging: i) multi-planet systems around evolved stars show a slight metallicity enhancement compared with single-planet systems; ii) planets with a ≲ 0.5 AU orbit subgiants with [Fe/H] > 0 and giants hosting planets with a ≲ 1 AU have [Fe/H] < 0; iii) higher-mass planets tend to orbit more metal-poor giants with M⋆ ≤ 1.5 M☉, whereas planets around subgiants seem to follow the planet-mass metallicity trend observed on dwarf hosts; iv) [X/Fe] ratios for Na, Si, and Al seem to increase with the mass of planets around giants; v) planets orbiting giants show lower orbital eccentricities than those orbiting subgiants and dwarfs, suggesting a more efficient tidal circularization or the result of the engulfment of close-in planets with larger eccentricities.

Based on spectral data retrieved from the ELODIE and SOPHIE archives at Observatoire de Haute-Provence (Moultaka et al. 2004).Based on data obtained from the ESO Science Archive Facility collected at the La Silla Paranal Observatory, ESO (Chile) with the HARPS and FEROS spectrographs. 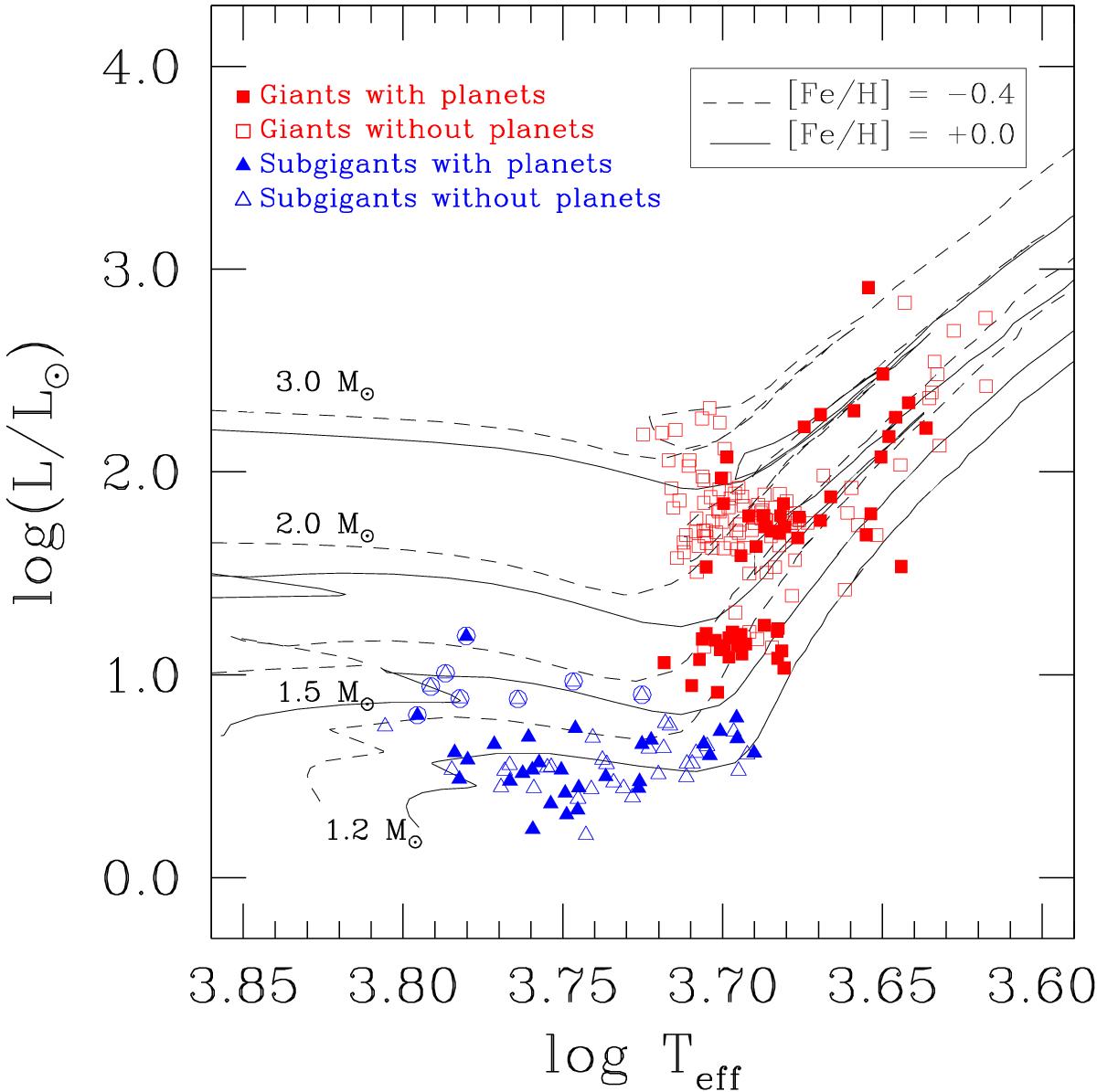