We detect bright [Cii]λ158 μm line emission from the radio galaxy 3C 326N at z = 0.09, which shows no sign of ongoing or recent star formation (SFR< 0.07 M☉ yr-1) despite having strong H2 line emission and a substantial amount of molecular gas (2 × 109 M☉, inferred from the modeling of the far-infrared (FIR) dust emission and the CO(1-0) line emission). The [Cii] line is twice as strong as the 0-0S(1) 17 μm H2 line, and both lines are much in excess of what is expected from UV heating. We combine infrared Spitzer and Herschel photometry and line spectroscopy with gas and dust modeling to infer the physical conditions in the [Cii]-emitting gas. The [Cii] line, like rotational H2 emission, traces a significant fraction (30 to 50%) of the total molecular gas mass. This gas is warm (70 <T< 100 K) and at moderate densities 700 <nH< 3000 cm-3, constrained by both the observed [Cii]-to-[Oi] and [Cii]-to-FIR ratios. The [Cii] line is broad, asymmetric, with a redshifted core component (FWHM = 390 km s-1) and a very broad blueshifted wing (FWHM = 810 km s-1). The line profile of [Cii] is similar to the profiles of the near-infrared H2 lines and the Na D optical absorption lines, and is likely to be shaped by a combination of rotation, outflowing gas, and turbulence. If the line wing is interpreted as an outflow, the mass loss rate would be higher than 20 M☉ yr-1, and the depletion timescale close to the orbital timescale (≈ 3 × 107 yr). If true, we are observing this object at a very specific and brief time in its evolution, assuming that the disk is not replenished. Although there is evidence of an outflow in this source, we caution that the outflow rates may be overestimated because the stochastic injection of turbulent energy on galactic scales can create short-lived, large velocity increments that contribute to the skewness of the line profile and mimic outflowing gas. The gas physical conditions raise the issue of the heating mechanism of the warm gas, and we show that the dissipation of turbulent energy is the main heating process. Cosmic rays can also contribute to the heating, but cannot be the dominant heating source because it requires an average gas density that is higher than the observational constraints. After subtracting the contribution of the disk rotation, we estimate the turbulent velocity dispersion of the molecular gas to be 120 <σturb< 330 km s-1, which corresponds to a turbulent heating rate that is higher than the gas cooling rate computed from the line emission. The dissipation timescale of the turbulent energy (2 × 107 - 108 yrs) is comparable to or larger than the jet lifetime or the dynamical timescale of the outflow, which means that turbulence can be sustained during the quiescent phases when the radio jet is shut off. The strong turbulent support maintains a very high gas scale height (0.3 to 4 kpc) in the disk. The cascade of turbulent energy can inhibit the formation of gravitationally bound structures on all scales, which offers a natural explanation for the lack of ongoing star formation in 3C 326N, despite its having sufficient molecular gas to form stars at a rate of a few solar mass per year. To conclude, the bright [Cii] line indicates that strong AGN jet-driven turbulence may play a key role in enhancing the amount of molecular gas (positive feedback) but still can prevent star formation on galactic scales (negative feedback).

Based on Herschel observations. Herschel is an ESA space observatory with science instruments provided by European-led Principal Investigator consortia and with important participation from NASA. 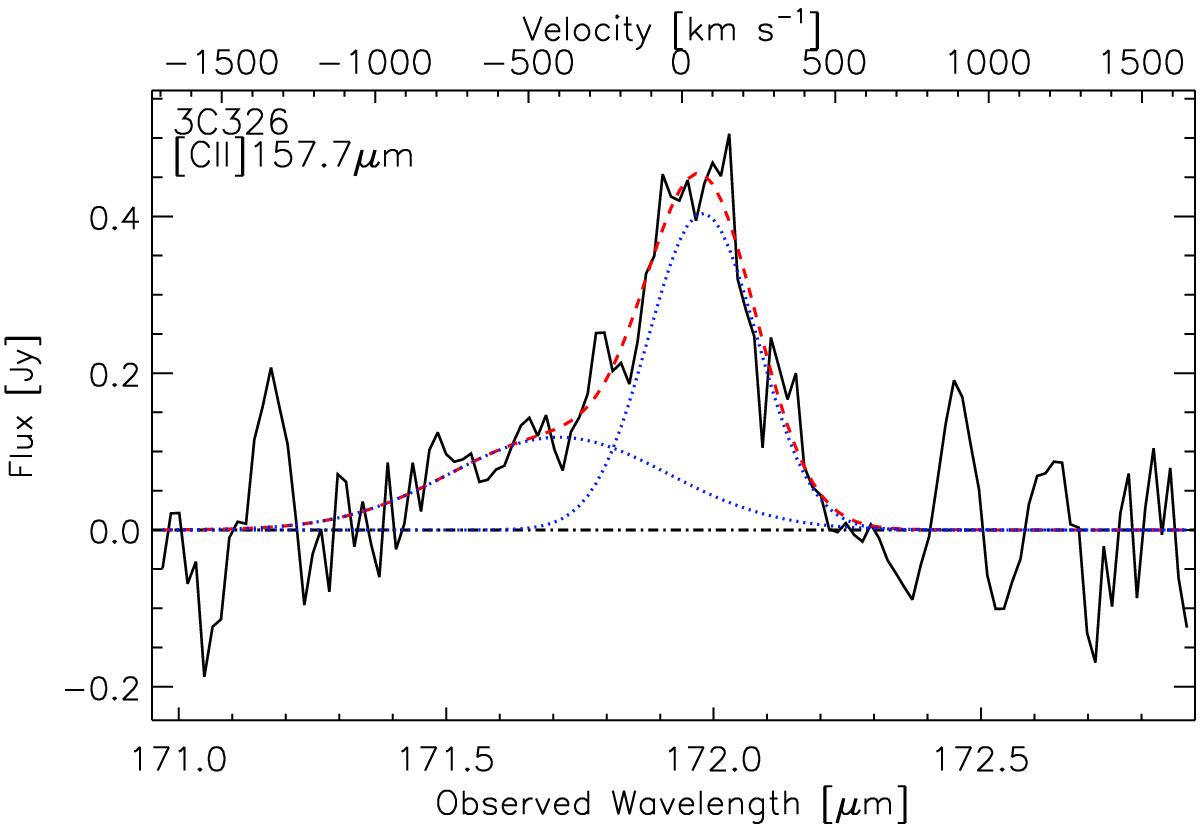