Context. This paper is the second in a series of ammonia (NH3) multilevel imaging studies in high-mass star forming regions.
Aims: We want to identify the location of the maser emission from highly excited levels of ammonia within the W51 IRS2 high-mass star forming complex that was previously discovered in a single dish monitoring program.
Methods: We have used the Karl Jansky Very Large Array (JVLA) at the 1 cm band to map five highly excited metastable inversion transitions of NH3, (J,K) = (6,6), (7, 7), (9, 9), (10, 10), and (13, 13), in W51 IRS2 with ~0.̋2 angular resolution.
Results: We present detections of both thermal (extended) ammonia emission in the five inversion lines, with rotational states ranging in energy from about 400 K to 1700 K, and point-like ammonia maser emission in the (6, 6), (7, 7), and (9, 9) lines. For the point-like emission, we estimate lower limits to the peak brightness temperatures of 1.7 × 105 K, 6 × 103 K, and 1 × 104 K for the (6, 6), (7, 7), and (9, 9) transitions, respectively, confirming their maser nature. The thermal ammonia emits around a local standard of rest velocity of VLSR = 60 km s-1, near the cloud's systemic velocity, appears elongated in the east-west direction across 4'' and is confined by the HII regions W51d (to the north), W51d1 (to the east), and W51d2 (to the west). The NH3 masers are observed in the eastern tip of the dense clump traced by thermal NH3, offset by 0.̋65 to the east from its emission peak, and have a peak velocity at ~47.5 km s-1. No maser components are detected near the systemic velocity. The NH3 masers arise close to but separated from (0.̋65 or 3500 AU) the rare vibrationally excited SiO masers, which are excited in a powerful bipolar outflow driven by the deeply embedded high-mass young stellar object (YSO) W51-North. This means that the two maser species cannot be excited by the same object. Interestingly, the NH3 masers originate at the same sky position as a peak in a submm line of SO2 imaged with the Submillimeter Array, tracing a face-on circumstellar disk or ring around W51-North. In addition, the thermal emission from the most highly excited NH3 lines, (10, 10) and (13, 13), shows two main condensations, the dominant one towards W51-North with the SiO and H2O masers, and a weaker peak at the NH3 maser position.
Conclusions: We propose a scenario where the ring seen in SO2 emission is a circumbinary disk surrounding (at least) two high-mass YSOs, W51-North (exciting the SiO masers) and a nearby companion (exciting the NH3 masers), separated by 3500 AU. This finding indicates a physical connection (in a binary) between the two rare SiO and NH3 maser species. 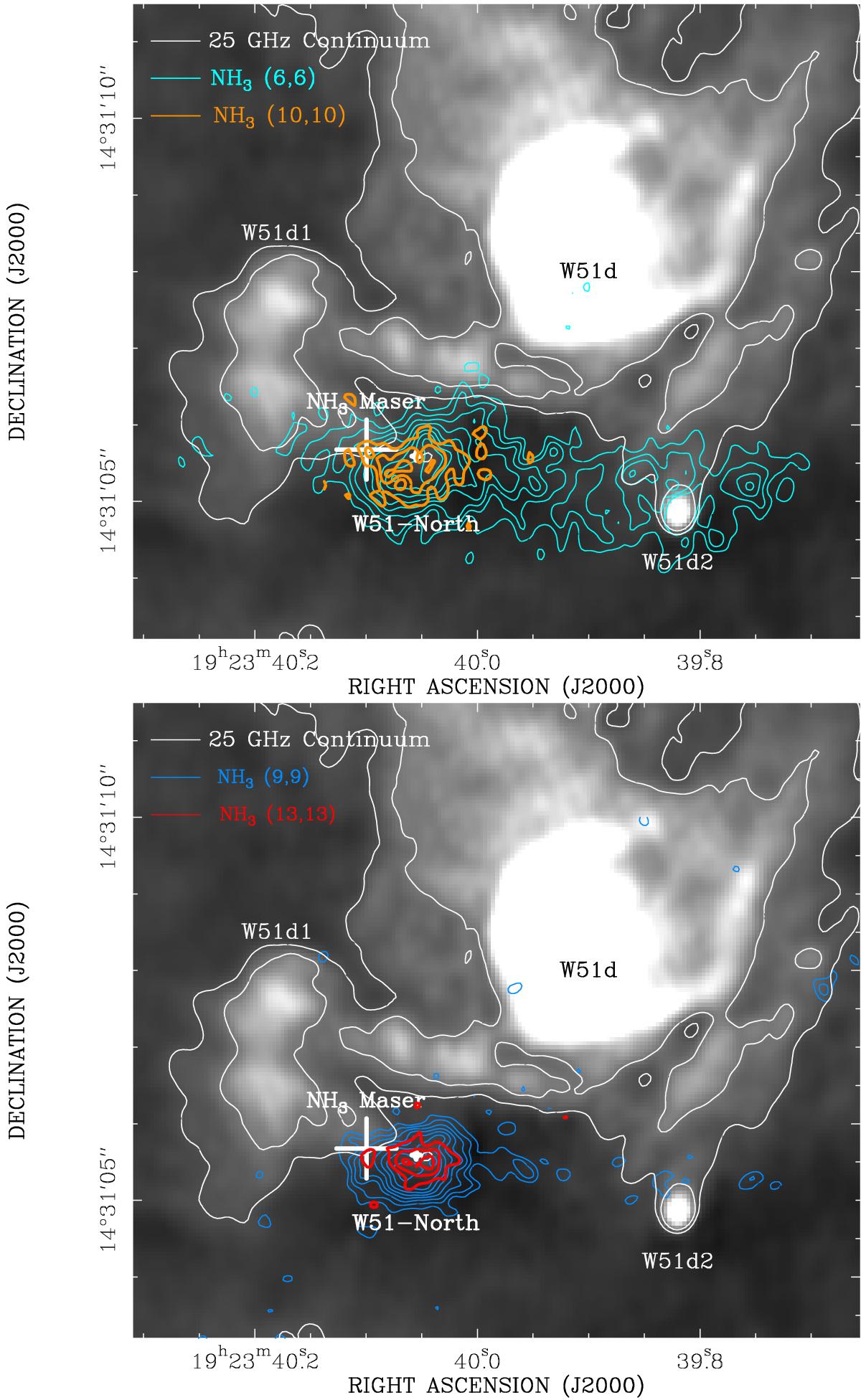