The polar disk galaxy NGC 4650A was observed during the commissioning of the Multi Unit Spectroscopic Explorer (MUSE) at the ESO Very Large Telescope to obtain the first 2D map of the velocity and velocity dispersion for both stars and gas. The new MUSE data allow the analysis of the structure and kinematics towards the central regions of NGC 4650A, where the two components co-exist. These regions were unexplored by the previous long-slit literature data available for this galaxy. The stellar velocity field shows that there are two main directions of rotation, one along the host galaxy major axis (PA = 67 deg) and the other along the polar disk (PA = 160 deg). The host galaxy has, on average, the typical pattern of a rotating disk, with receding velocities on the SW side and approaching velocities on the NE side, and a velocity dispersion that remains constant at all radii (σstar ~ 50-60 km s-1). The polar disk shows a large amount of differential rotation from the centre up to the outer regions, reaching V ~ 100-120 km s-1 at R ~ 75 arcsec ~ 16 kpc. Inside the host galaxy, a velocity gradient is measured along the photometric minor axis. Close to the centre, for R ≤ 2 arcsec the velocity profile of the gas suggests a decoupled component and the velocity dispersion increases up to ~110 km s-1, while at larger distances it remains almost constant (σgas ~ 30-40 km s-1). The extended view of NGC 4650A given by the MUSE data is a galaxy made of two perpendicular disks that remain distinct and drive the kinematics right into the very centre of this object. In order to match this observed structure for NGC 4650A, we constructed a multicomponent mass model made by the combined projection of two disks. By comparing the observations with the 2D kinematics derived from the model, we found that the modelled mass distribution in these two disks can, on average, account for the complex kinematics revealed by the MUSE data, also in the central regions of the galaxy where the two components coexist. This result is a strong constraint on the dynamics and formation history of this galaxy; it further supports the idea that polar disk galaxies like NGC 4650A were formed through the accretion of material that has different angular momentum.

This work is based on observations taken at the ESO La Silla Paranal Observatory within the MUSE Commissioning. 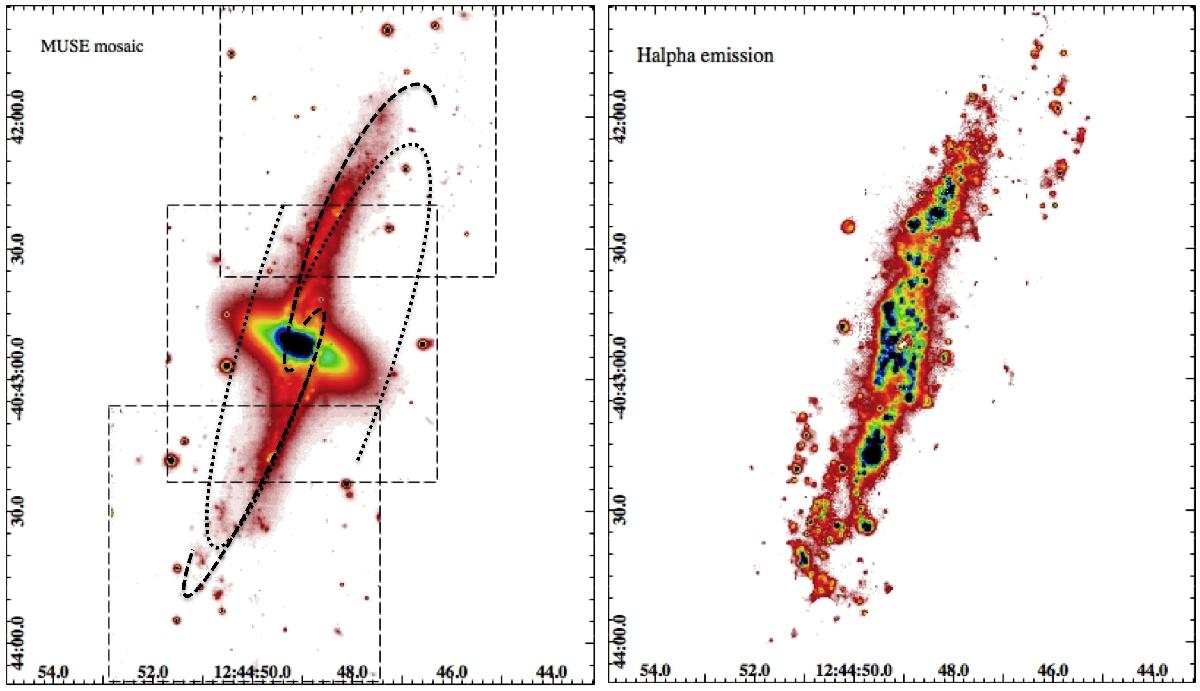