Context. The complex shape of comet 67P and its oblique rotation axis cause pronounced seasonal effects. Irradiation and hence activity vary strongly.
Aims: We investigate the insolation of the cometary surface in order to predict the sublimation of water ice. The strongly varying erosion levels are correlated with the topography and morphology of the present cometary surface and its evolution.
Methods: The insolation as a function of heliocentric distance and diurnal (spin dependent) variation is calculated using >105 facets of a detailed digital terrain model. Shading, but also illumination and thermal radiation by facets in the field of view of a specific facet are iteratively taken into account. We use a two-layer model of a thin porous dust cover above an icy surface to calculate the water sublimation, presuming steady state and a uniform surface. Our second model, which includes the history of warming and cooling due to thermal inertia, is restricted to a much simpler shape model but allows us to test various distributions of active areas.
Results: Sublimation from a dirty ice surface yields maximum erosion. A thin dust cover of 50 μm yields similar rates at perihelion. Only about 6% of the surface needs to be active to match the observed water production rates at perihelion. A dust layer of 1 mm thickness suppresses the activity by a factor of 4 to 5. Erosion on the south side can reach more than 10 m per orbit at active spots. The energy input to the concave neck area (Hapi) during northern summer is enhanced by about 50% owing to self-illumination. Here surface temperatures reach maximum values along the foot of the Hathor wall. Integrated over the whole orbit this area receives the least energy input. Based on the detailed shape model, the simulations identify "hot spots" in depressions and larger pits in good correlation with observed dust activity. Three-quarters of the total sublimation is produced while the sub-solar latitude is south, resulting in a distinct dichotomy in activity and morphology.
Conclusions: The northern areas display a much rougher morphology than what is seen on Imhotep, an area at the equator that will be fully illuminated when 67P is closer to the Sun. Self-illumination in concave regions enhance the energy input and hence erosion. This explains the early activity observed at Hapi. Cliffs are more prone to erosion than horizontal, often dust covered, areas, which leads to surface planation. Local activity can only persist if the forming cliff walls are eroding. Comet 67P has two lobes and also two distinct sides. Transport of material from the south to the north is probable. The morphology of the Imhotep plain should be typical for the terrains of the yet unseen southern hemisphere. 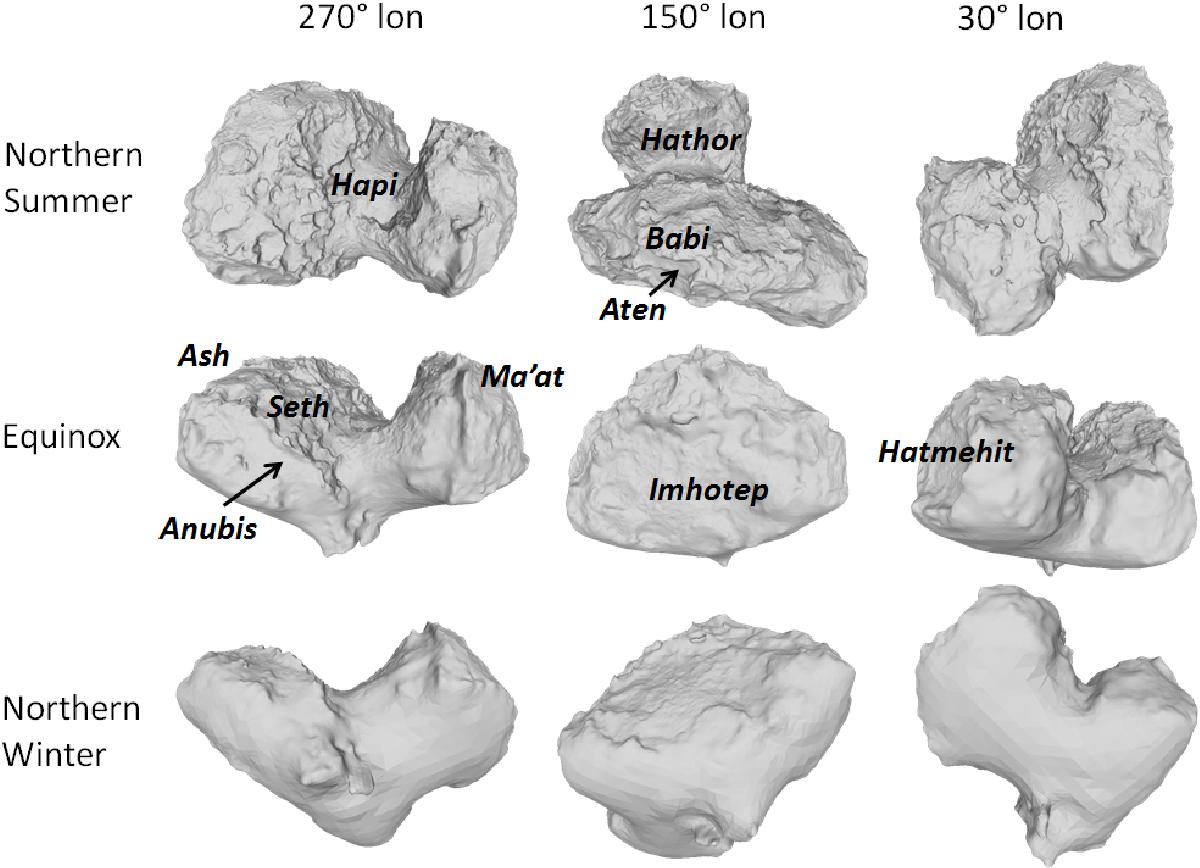