Context. T and Y dwarfs are among the coolest and least luminous objects detected, and they can help to understand the properties of giant planets. Up to now, there are more than 350 T dwarfs that have been identified thanks to large imaging surveys in the infrared, and their multiplicity properties can shed light on the formation process.
Aims: The aim of this work is to look for companions around a sample of seven ultracoool objects. Most of them have been discovered by the WISE observatory and have not been studied before for multiplicity.
Methods: We observed a sample six T dwarfs and one L9 dwarf with the Laser Guide Star (LGS) and NAOS-CONICA, the adaptive optics (AO) facility, and the near infrared camera at the ESO Very Large Telescope. We observed all the objects in one or more near-IR filters (JHKs).
Results: From the seven observed objects, we have identified a subarcsecond binary system, WISE J0612-3036, composed of two similar components with spectral types of T6. We measure a separation of ρ = 350 ± 5 mas and a position angle of PA = 235 ± 1°. Using the mean absolute magnitudes of T6 dwarfs in the 2MASS JHKs bands, we estimate a distance of d = 31 ± 6 pc and derive a projected separation of ρ ~ 11 ± 2 au. Another target, WISE J2255-3118, shows a very faint object at 1.̋3 in the Ks image. The object is marginally detected in H, and we derive a near infrared color of H - Ks> 0.1 mag. HST/WFC3 public archival data reveals that the companion candidate is an extended source. Together with the derived color, this suggests that the source is most probably a background galaxy. The five other sources are apparently single, with 3-σ sensitivity limits between H = 19-21 for companions at separations ≥0.̋5.
Conclusions: WISE 0612-3036 is probably a new T-dwarf binary composed of two T6 dwarfs. As in the case of other late T-dwarf binaries, it shows a mass ratio close to 1, although its projected separation, ~11 au, is larger than the average (~5 au). Additional observations are needed to confirm that the system is bound.

This work used data collected at the VLT under runs 89.C-0494(A, B, C) and 91.C-0501(A, B).Based on observations made with the NASA/ESA Hubble Space Telescope, and obtained from the Hubble Legacy Archive, which is a collaboration between the Space Telescope Science Institute (STScI/NASA), the Space Telescope European Coordinating Facility (ST-ECF/ESA), and the Canadian Astronomy Data Centre (CADC/NRC/CSA). 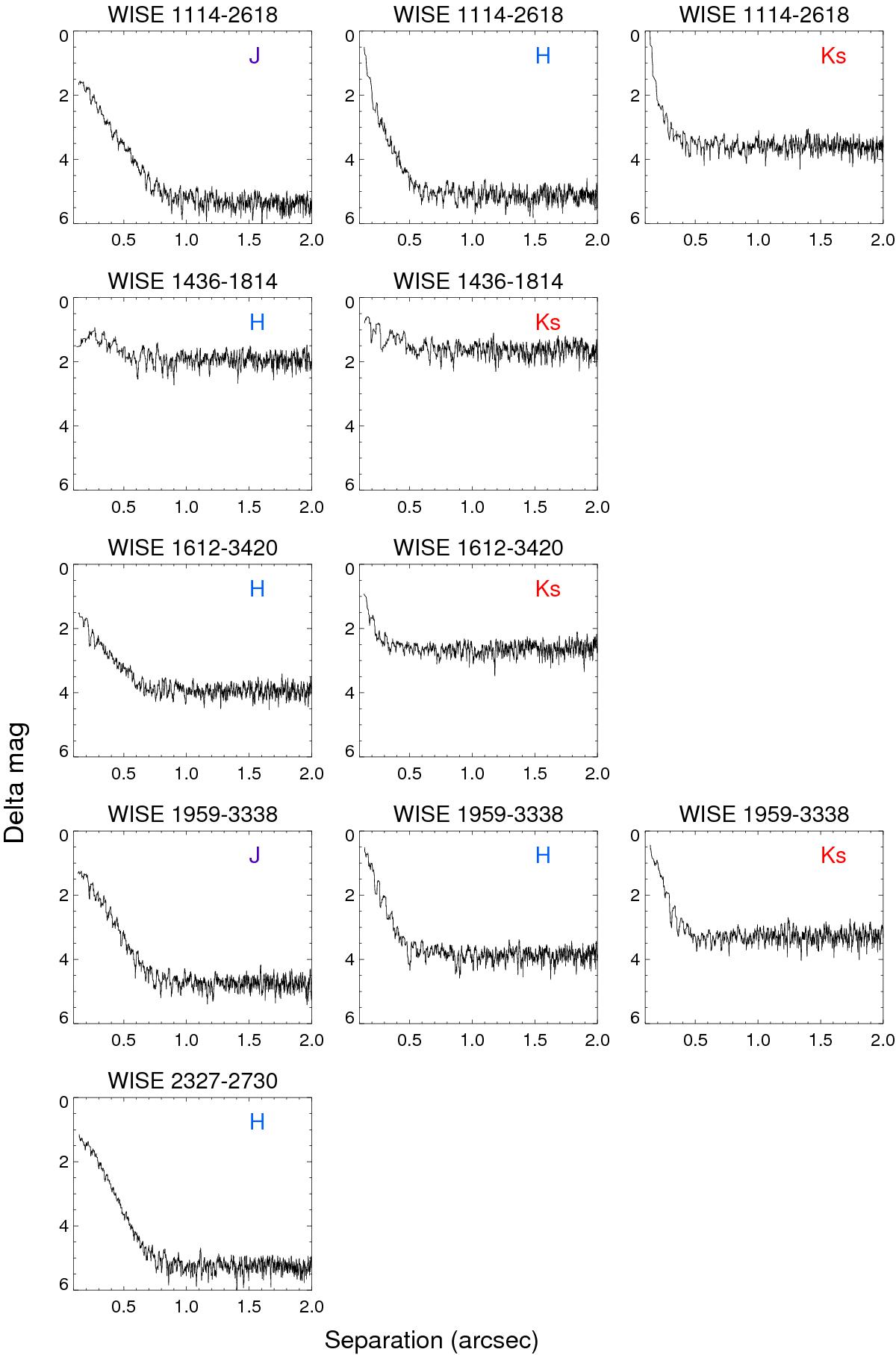