Context. We study the possibility of flare process triggering by waves propagating from the sunspot along a magnetic loop (channel) to a nearby flare site.
Aims: We present a relationship between the dynamics of ~3-min slow magnetoacoustic waves in the sunspot and flare emergence process. Waves propagating in the magnetic channel whose one foot is anchored in the umbra represent the disturbing agent responsible for triggering the flare energy release.
Methods: We applied time-distance plots and pixel wavelet filtration methods to obtain spatio-temporal distribution of wave power variations in radio and SDO/AIA data. To find the magnetic channel, we used potential magnetic field extrapolation of SDO/HMI magnetograms. The propagation velocity of wave fronts was measured from wave locations at specific times.
Results: In the correlation curves of the 17 GHz (NoRH) radio emission, we found a monotonous energy amplification of the 3-min waves in the sunspot umbra before the 2012 June 7 flare. This amplification was associated with an increase in the length of the oscillatory wakes in coronal loops (SDO/AIA, 171 Å) prior to the flare onset. A peculiarity of the flare is the constant level of the flare emission in soft X-rays (RHESSI, 3-25 keV) for ~10 min after the short impulsive phase, which indicates continuing energy release. Throughout this time, we found transverse oscillations of the flare loop with a 30 s period in the radio-frequency range (NoRH, 17 GHz). This period appears to be related to the 3-min waves from the sunspot. The magnetic field extrapolation based on SDO/HMI magnetograms shows the existence of the magnetic channel (waveguide) connecting the sunspot with the energy release region.
Conclusions: We analysed the sunspot 3-min wave dynamics and found a correlation between the oscillation power amplification and flare triggering in the region connected to the sunspot through the magnetic channel. We propose that this amplified wave flux triggered the flare. The flare occurred because of this amplified flux, however, and because a sufficient amount of free magnetic energy was accumulated in close vicinity to the magnetic channel prior to the flare. Furthermore, because of loop heating, the wave velocity (sound velocity) increased with the penetration of waves into the energy release site. The heating is shown to be able to proceed after the flare main peak owing to a further energy pumping in the form of waves from the sunspot and additional reconnection episodes in the flare region. 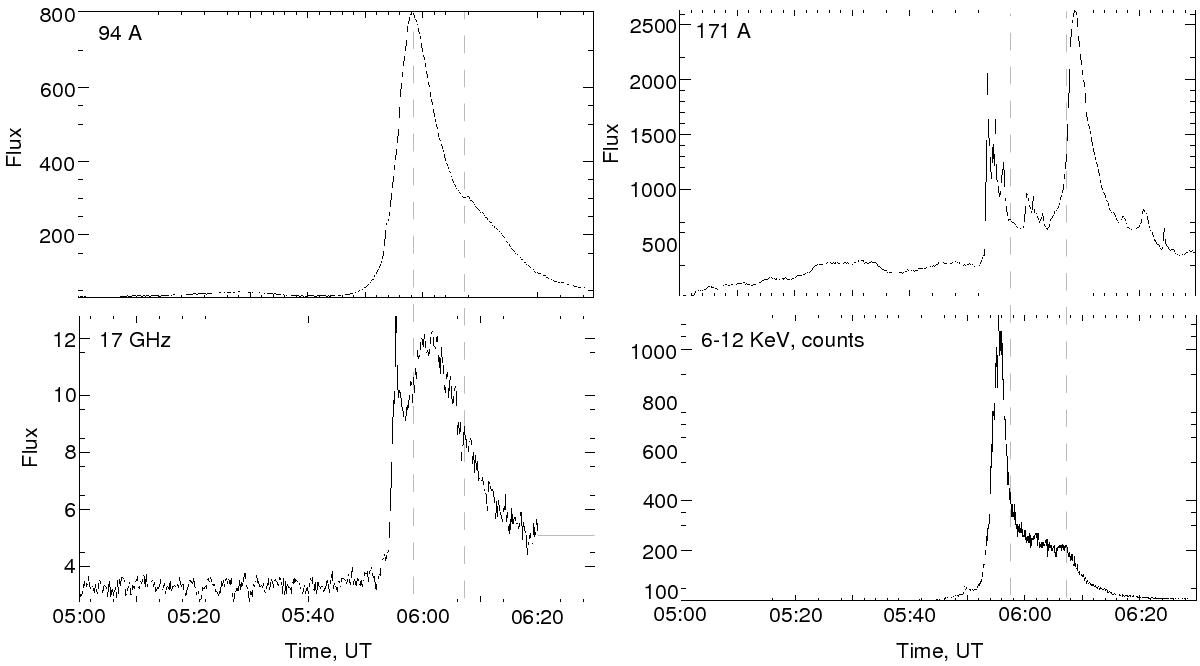