Context. The transport of Lyα photons in galaxies is a complex process and the conditions under which Lyα photons manage to escape from certain galaxies is still under investigation. The Lyman alpha reference sample (LARS) is a sample of 14 local star-forming galaxies, designed to study Lyα in detail and relate it to rest-frame UV and optical emission.
Aims: With the aim of identifying rest-frame UV and optical properties, which are typical of Lyα emitters (LAEs, galaxies with EW(Lyα) > 20 Å) at both low and high redshift, we investigated the morphological properties of the LARS galaxies, in particular the ones that exhibit intense Lyα radiation.
Methods: We measured sizes and morphological parameters in the continuum, Lyα, and Hα images. We studied morphology by using the Gini coefficient vs. M20 and asymmetry vs. concentration diagrams. We then simulated LARS galaxies at z ~ 2 and 5.7, performing the same morphological measurements. We also investigated the detectability of LARS galaxies in current deep field observations. The subsample of LAEs within LARS (LARS-LAEs) was stacked to provide a comparison to stacking studies performed at high redshift.
Results: LARS galaxies have continuum size, stellar mass, and rest-frame absolute magnitude typical of Lyman break analogues in the local Universe and also similar to 2 < z < 3 star-forming galaxies and massive LAEs. LARS optical morphology is consistent with the one of merging systems, and irregular or starburst galaxies. For the first time we quantify the morphology in Lyα images: even if a variety of intrinsic conditions of the interstellar medium can favour the escape of Lyα photons, LARS-LAEs appear small in the continuum, and their Lyα is compact. LARS galaxies tend to be more extended in Lyα than in the rest-frame UV. It means that Lyα photons escape by forming haloes around HII regions of LARS galaxies.
Conclusions: The stack of LARS-LAE Lyα images is peaked in the centre, indicating that the conditions, which make a galaxy an LAE, tend to produce a concentrated surface brightness profile. On the other hand, the stack of all LARS galaxies is shallower and more extended. This can be caused by the variety of dust and HI amount and distribution, which produces a more complex, patchy, and extended profile, like the one observed for Lyman break galaxies that can contribute to the stack. We cannot identify a single morphological property that controls whether a galaxy emits a net positive Lyα flux. However, the LARS-LAEs have continuum properties consistent with merging systems.

Based on observations made with the NASA/ESA Hubble Space Telescope. These observations are associated with programme 12310.Figures 5, 6 and 18, Tables 5-6, and Appendices are available in electronic form at http://www.aanda.org 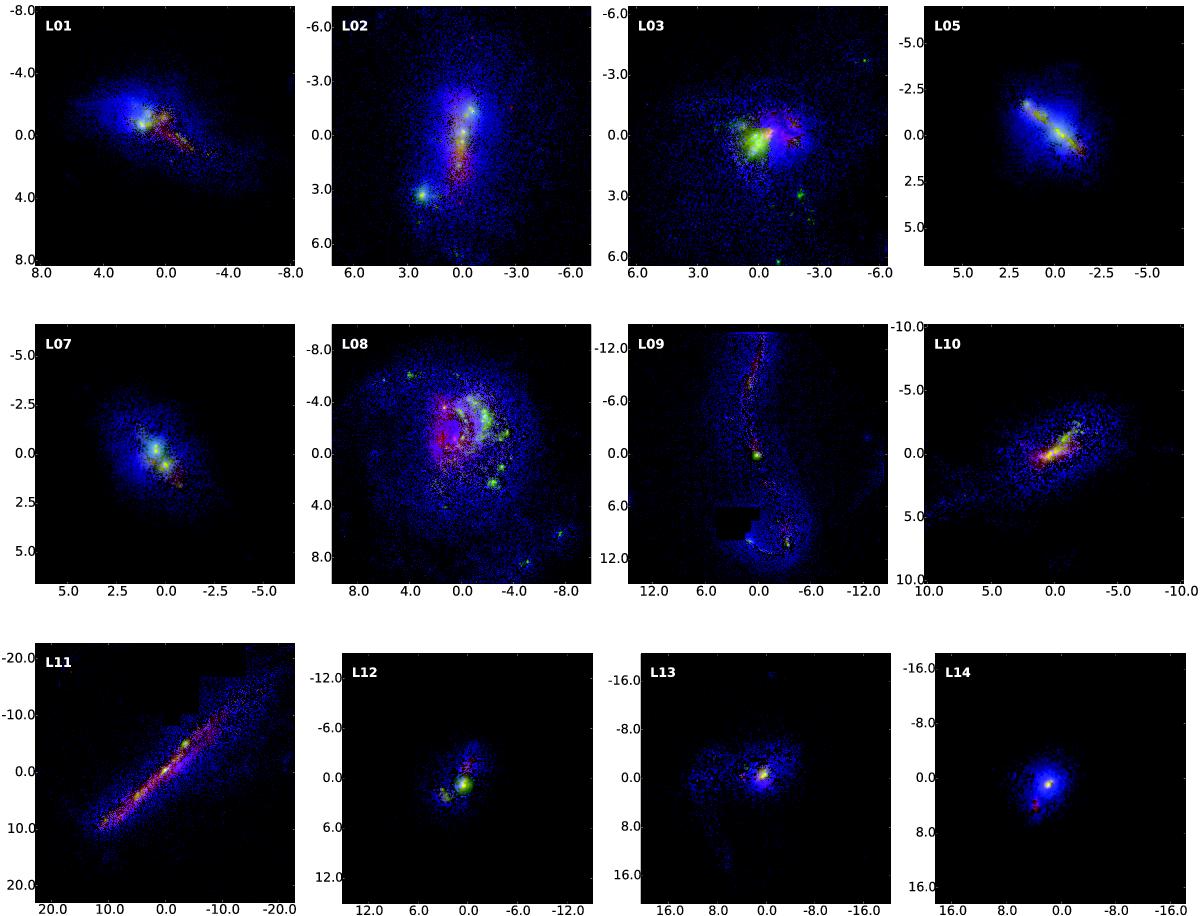