Context. Rossby wave instability (RWI) at dead zone boundaries may play an important role in planet formation. Viscous hydrodynamics results suggest RWI is excited only when the viscosity changes over a radial distance less than two density scale heights. However in the disks around Solar-mass T Tauri stars, it is not viscosity but magnetic forces that provide the accretion stress beyond about 10 AU, where surface densities are low enough so stellar X-rays and interstellar cosmic rays can penetrate.
Aims: We explore the conditions for RWI in the smooth transition with increasing distance, from resistive and magnetically-dead to conducting and magnetically-active.
Methods: We perform 3D unstratified MHD simulations with the Pencil code, using static resistivity profiles.
Results: We find that in MHD, contrary to viscous models, the RWI is triggered even with a gradual change in resistivity extending from 10 to 40 AU (i.e., spanning 15 scale heights for aspect ratio 0.1). This is because magneto-rotational turbulence sets in abruptly when the resistivity reaches a threshold level. At higher resistivities the longest unstable wavelength is quenched, resulting in a sharp decline of the Maxwell stress towards the star. The sharp gradient in the magnetic forces leads to a localized density bump, that is in turn Rossby wave unstable.
Conclusions: Even weak gradients in the resistivity can lead to sharp transitions in the Maxwell stress. As a result the RWI is more easily activated in the outer disk than previously thought. Rossby vortices at the outer dead zone boundary thus could underlie the dust asymmetries seen in the outer reaches of transition disks.

A movie associated to Fig. 4 is available in electronic form at http://www.aanda.org 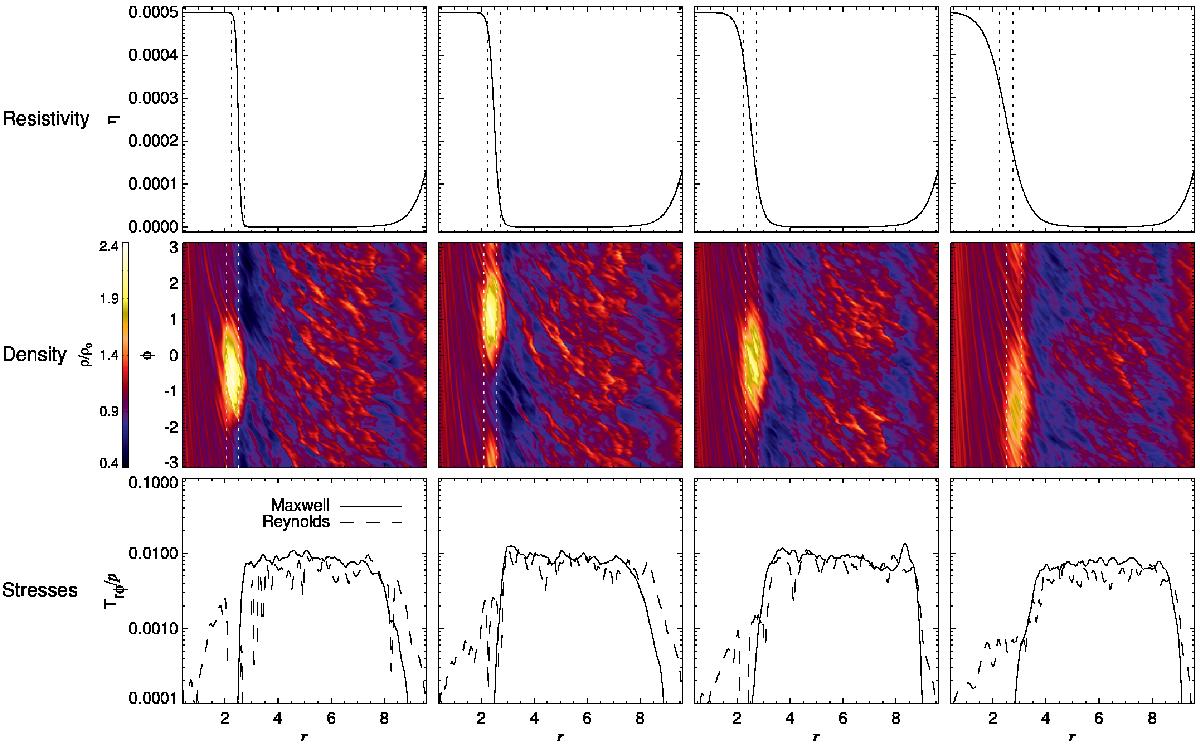