In this study, we explore and review the scientific potential for exoplanet characterization by a high-contrast optical coronagraph on WFIRST/AFTA. We suggest that the heterogeneity in albedo spectra and planet/star flux ratios as a function of orbital distance, planet mass, and composition expected for the giant exoplanets at separations from their primaries accessible to WFIRST will provide unique constraints on giant planet atmospheres, evolution, aerosol and cloud properties, and general theory. Such exoplanets are not merely extrapolations of Jupiter and Saturn, but are likely to occupy a rich continuum of varied behaviors. Each in themselves and jointly, optical spectra, photometry, and polarization measurements of a diverse population of giant exoplanets in the solar neighborhood has the potential to reveal a multitude of fundamental features of their gas-giant chemistry, atmospheres, and formation. Such a campaign will enrich our understanding of this class of planets beyond what is possible with even a detailed exploration of the giants in our own solar system, and will compliment ongoing studies of exoplanets in the infrared and on close-in orbits inaccessible to coronagraphy.

Publication:
arXiv e-prints
Pub Date:
December 2014
arXiv:
arXiv:1412.6097
Bibcode:
2014arXiv1412.6097B
Keywords:
E-Print:
A study outlining the scientific case for a high-contrast coronagraph on WFIRST in support of its exoplanet campaign, performed on behalf of the WFIRST/AFTA Science Definition Team and the Exo-S and Exo-C Science and Technology Definition Teams 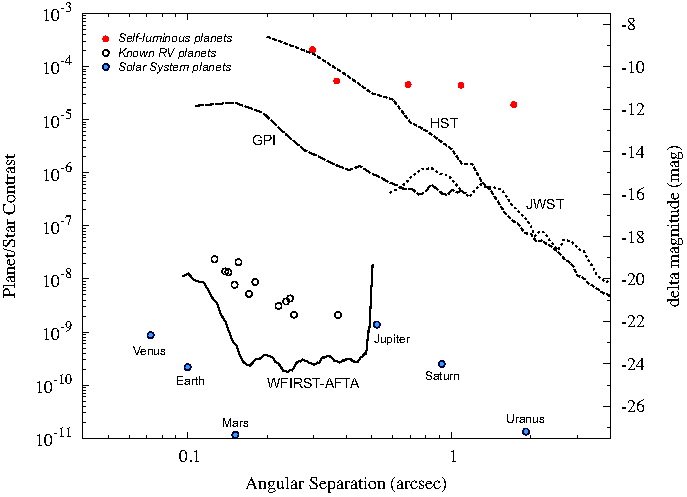