The Far-Ultraviolet Ups and Downs of Alpha Centauri

Four years (2010-2014) of semiannual pointings by Hubble Space Telescope Imaging Spectrograph (STIS) on nearby Alpha Centauri have yielded a detailed time history of far-ultraviolet emissions of the solar-like primary (A: G2V) and the cooler, but more active, secondary (B: K1V). This period saw A climbing out of a prolonged coronal X-ray minimum, as documented by Chandra, while B was rising to, then falling from, a peak of its long-term (8 yr) starspot cycle. The FUV fluxes of the primary were steady over most of the STIS period, although the [Fe XII] 124 nm coronal forbidden line (T= 1.5 MK) partly mirrored the slowly rising X-ray fluxes. The FUV emissions of the secondary more closely tracked the rise and fall of its coronal luminosities, especially the "hot lines" like Si IV, C IV, and N V (T= 80,000-200,000 K), and coronal [Fe XII] itself. The hot lines of both stars were systematically redshifted, relative to narrow chromospheric emissions, by several km/s, showing little change in amplitude over the 4-year period; especially for Alpha Cen B, despite the significant evolution of its coronal activity. Further, the hot line profiles of both stars, individually and epoch-averaged, could be decomposed into two nearly equal components, one narrow (FWHM~ 25-45 km/s), the other broad (60-80 km/s). Not much variation of the component properties was seen over the 4-year period, even over the major cycle changes of B. This suggests that there is a dominant "quantum" of FUV surface activity that is relatively unchanged during the cycle, aside from the fractional area covered. 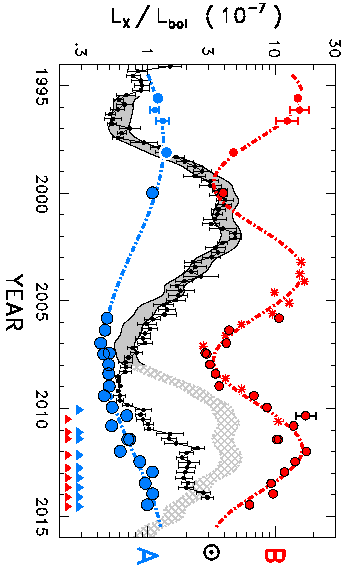