We analyze the expansion of hydrogen-poor knots and filaments in the born-again planetary nebulae A30 and A78 based on Hubble Space Telescope (HST) images obtained almost 20 yr apart. The proper motion of these features generally increases with distance to the central star, but the fractional expansion decreases, i.e., the expansion is not homologous. As a result, there is not a unique expansion age, which is estimated to be 610-950 yr for A30 and 600-1140 yr for A78. The knots and filaments have experienced complex dynamical processes: the current fast stellar wind is mass loaded by the material ablated from the inner knots; the ablated material is then swept up until it shocks the inner edges of the outer, hydrogen-rich nebula. The angular expansion of the outer filaments shows a clear dependence on position angle, indicating that the interaction of the stellar wind with the innermost knots channels the wind along preferred directions. The apparent angular expansion of the innermost knots seems to be dominated by the rocket effect of evaporating gas and by the propagation of the ionization front inside them. Radiation-hydrodynamical simulations show that a single ejection of material followed by a rapid onset of the stellar wind and ionizing flux can reproduce the variety of clumps and filaments at different distances from the central star found in A30 and A78.

Based on observations made with the NASA/ESA Hubble Space Telescope, obtained at the Space Telescope Science Institute, which is operated by the Association of Universities for Research in Astronomy, Inc., under NASA contract NAS 5-26555. These observations are associated with program No. 12935. 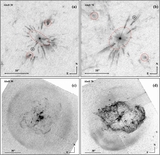