We introduce a new method to determine the relative contributions of different types of stars to the integrated light of nearby early-type galaxies. As is well known, the surface brightness of these galaxies shows pixel-to-pixel fluctuations due to Poisson variations in the number of giant stars. Differential spectroscopy of pixels as a function of fluctuation strength ("fluctuation spectroscopy") effectively measures the spectral variation of stars as a function of their luminosity, information that is otherwise difficult to obtain for individual stars outside of the Local Group. We apply this technique to the elliptical galaxy NGC 4472, using Hubble Space Telescope/Advanced Camera for Surveys imaging in six narrow-band ramp filters tuned to spectral features in the range 0.8 μm-1.0 μm. Pixels with ±5% broad-band variations show differential color variations of 0.1%-1.0% in the narrow-band filters. These variations are primarily due to the systematic increase in TiO absorption strength with increasing luminosity on the upper giant branch. The data are very well reproduced by the same Conroy & van Dokkum stellar population synthesis model that is the best fit to the integrated light, with residuals in the range 0.03%-0.09%. Models with ages or metallicities that are significantly different from the integrated-light values do not yield good fits. We can also rule out several modifications to the underlying model, including the presence of a significant (>3% of the light) population of late M giants. The current observations constitute a powerful test of the expected luminosities and temperatures of metal-rich giants in massive early-type galaxies. Studies of pixels with much larger (negative) fluctuations will provide unique information on main sequence stars and the stellar initial mass function. 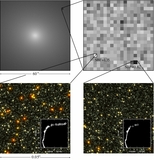