Recent asteroseismic advances have allowed for direct measurements of the internal rotation rates of many subgiant and red giant stars. Unlike the nearly rigidly rotating Sun, these evolved stars contain radiative cores that spin faster than their overlying convective envelopes, but slower than they would in the absence of internal angular momentum transport. We investigate the role of internal gravity waves in angular momentum transport in evolving low-mass stars. In agreement with previous results, we find that convectively excited gravity waves can prevent the development of strong differential rotation in the radiative cores of Sun-like stars. As stars evolve into subgiants, however, low-frequency gravity waves become strongly attenuated and cannot propagate below the hydrogen-burning shell, allowing the spin of the core to decouple from the convective envelope. This decoupling occurs at the base of the subgiant branch when stars have surface temperatures of T ≈ 5500 K. However, gravity waves can still spin down the upper radiative region, implying that the observed differential rotation is likely confined to the deep core near the hydrogen-burning shell. The torque on the upper radiative region may also prevent the core from accreting high angular momentum material and slow the rate of core spin-up. The observed spin-down of cores on the red giant branch cannot be totally attributed to gravity waves, but the waves may enhance shear within the radiative region and thus increase the efficacy of viscous/magnetic torques. 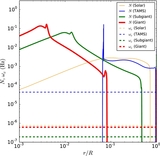