We present optical and near-infrared multi-band linear polarimetry of the highly reddened Type Ia supernova (SN) 2014J that appeared in M82. SN 2014J exhibits large polarization at shorter wavelengths, e.g., 4.8% in the B band, which decreases rapidly at longer wavelengths, while the position angle of the polarization remains at approximately 40° over the observed wavelength range. These polarimetric properties suggest that the observed polarization is likely predominantly caused by the interstellar dust within M82. Further analysis shows that the polarization peaks at a wavelengths much shorter than those obtained for the Galactic dust. The wavelength dependence of the polarization can be better described by an inverse power law rather than by the Serkowski law for Galactic interstellar polarization. These points suggest that the nature of the dust in M82 may be different from that in our Galaxy, with polarizing dust grains having a mean radius of <0.1 μm. 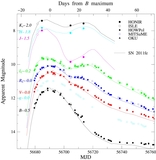