Evidence for Wave Heating of the Quiet-Sun Corona

We have measured the energy and dissipation of Alfvénic waves in the quiet Sun. A magnetic field model was used to infer the location and orientation of the magnetic field lines along which the waves are expected to travel. The waves were measured using spectral lines to infer the wave amplitude. The waves cause a non-thermal broadening of the spectral lines, which can be expressed as a non-thermal velocity v nt. By combining the spectroscopic measurements with this magnetic field model, we were able to trace the variation of v nt along the magnetic field. At each footpoint of the quiet-Sun loops, we find that waves inject an energy flux in the range of 1.3-5.5 × 105 erg cm-2 s-1. At the minimum of this range, this amounts to more than 80% of the energy needed to heat the quiet Sun. We also find that these waves are dissipated over a region centered on the top of the loops. The position along the loop where the damping begins is strongly correlated with the length of the loop, implying that the damping mechanism depends on the global loop properties rather than on local collisional dissipation. 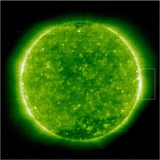