We present the results of the observations of a coronal mass ejection (CME) that occurred on 2009 May 13. The most important feature of these observations is that the CME was observed from the very early stage (the solar surface) up to a distance of 15 solar radii (R ☉). Below 2 R ☉, we used the data from the TESIS extreme-ultraviolet telescopes obtained in the Fe 171 Å and He 304 Å lines, and above 2 R ☉, we used the observations of the LASCO C2 and C3 coronagraphs. The CME was formed at a distance of 0.2-0.5R ☉ from the Sun's surface as a U-shaped structure, which was observed both in the 171 Å images and in the white light. Observations in the He 304 Å line showed that the CME was associated with an erupting prominence, which was not located above—as the standard model predicts—but rather in the lowest part of the U-shaped structure close to the magnetic X point. The prominence location can be explained with the CME breakout model. Estimates showed that CME mass increased with time. The CME trajectory was curved—its heliolatitude decreased with time. The CME started at a latitude of 50° and reached the ecliptic plane at distances of 2.5 R ☉. The CME kinematics can be divided into three phases: initial acceleration, main acceleration, and propagation with constant velocity. After the CME, onset GOES registered a sub-A-class flare. 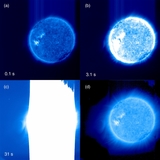