A Flare Observed in Coronal, Transition Region, and Helium I 10830 Å Emissions

On 2012 June 17, we observed the evolution of a C-class flare associated with the eruption of a filament near a large sunspot in the active region NOAA 11504. We obtained high spatial resolution filtergrams using the 1.6 m New Solar Telescope at the Big Bear Solar Observatory in broadband TiO at 706 nm (bandpass: 10 Å) and He I 10830 Å narrow band (bandpass: 0.5 Å, centered 0.25 Å to the blue). We analyze the spatio-temporal behavior of the He I 10830 Å data, which were obtained over a 90''×90'' field of view with a cadence of 10 s. We also analyze simultaneous data from the Atmospheric Imaging Assembly and Extreme Ultraviolet Variability Experiment instruments on board the Solar Dynamics Observatory spacecraft, and data from the Reuven Ramaty High Energy Solar Spectroscopic Imager and GOES spacecrafts. Non-thermal effects are ignored in this analysis. Several quantitative aspects of the data, as well as models derived using the "0D" enthalpy-based thermal evolution of loops model code, indicate that the triplet states of the 10830 Å multiplet are populated by photoionization of chromospheric plasma followed by radiative recombination. Surprisingly, the He II 304 Å line is reasonably well matched by standard emission measure calculations, along with the C IV emission which dominates the Atmosphere Imaging Assembly 1600 Å channel during flares. This work lends support to some of our previous work combining X-ray, EUV, and UV data of flares to build models of energy transport from corona to chromosphere. 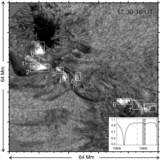