We present the discovery of 57 wide (>5'') separation, low-mass (stellar and substellar) companions to stars in the solar neighborhood identified from Pan-STARRS 1 (PS1) data and the spectral classification of 31 previously known companions. Our companions represent a selective subsample of promising candidates and span a range in spectral type of K7-L9 with the addition of one DA white dwarf. These were identified primarily from a dedicated common proper motion search around nearby stars, along with a few as serendipitous discoveries from our Pan-STARRS 1 brown dwarf search. Our discoveries include 23 new L dwarf companions and one known L dwarf not previously identified as a companion. The primary stars around which we searched for companions come from a list of bright stars with well-measured parallaxes and large proper motions from the Hipparcos catalog (8583 stars, mostly A-K dwarfs) and fainter stars from other proper motion catalogs (79170 stars, mostly M dwarfs). We examine the likelihood that our companions are chance alignments between unrelated stars and conclude that this is unlikely for the majority of the objects that we have followed-up spectroscopically. We also examine the entire population of ultracool (>M7) dwarf companions and conclude that while some are loosely bound, most are unlikely to be disrupted over the course of ~10 Gyr. Our search increases the number of ultracool M dwarf companions wider than 300 AU by 88% and increases the number of L dwarf companions in the same separation range by 82%. Finally, we resolve our new L dwarf companion to HIP 6407 into a tight (0.''13, 7.4 AU) L1+T3 binary, making the system a hierarchical triple. Our search for these key benchmarks against which brown dwarf and exoplanet atmosphere models are tested has yielded the largest number of discoveries to date. 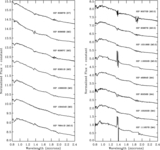