The radii of debris disks and the sizes of their dust grains are important tracers of the planetesimal formation mechanisms and physical processes operating in these systems. Here we use a representative sample of 34 debris disks resolved in various Herschel Space Observatory (Herschel is an ESA space observatory with science instruments provided by European-led Principal Investigator consortia and with important participation from NASA) programs to constrain the disk radii and the size distribution of their dust. While we modeled disks with both warm and cold components, and identified warm inner disks around about two-thirds of the stars, we focus our analysis only on the cold outer disks, i.e., Kuiper-belt analogs. We derive the disk radii from the resolved images and find a large dispersion for host stars of any spectral class, but no significant trend with the stellar luminosity. This argues against ice lines as a dominant player in setting the debris disk sizes, since the ice line location varies with the luminosity of the central star. Fixing the disk radii to those inferred from the resolved images, we model the spectral energy distribution to determine the dust temperature and the grain size distribution for each target. While the dust temperature systematically increases toward earlier spectral types, the ratio of the dust temperature to the blackbody temperature at the disk radius decreases with the stellar luminosity. This is explained by a clear trend of typical sizes increasing toward more luminous stars. The typical grain sizes are compared to the radiation pressure blowout limit s blow that is proportional to the stellar luminosity-to-mass ratio and thus also increases toward earlier spectral classes. The grain sizes in the disks of G- to A-stars are inferred to be several times s blow at all stellar luminosities, in agreement with collisional models of debris disks. The sizes, measured in the units of s blow, appear to decrease with the luminosity, which may be suggestive of the disk's stirring level increasing toward earlier-type stars. The dust opacity index β ranges between zero and two, and the size distribution index q varies between three and five for all the disks in the sample. 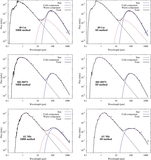