A State-dependent Influence of Type I Bursts on the Accretion in 4U 1608-52?

We investigated the possible feedback of type I bursts on the accretion process during the spectral evolution of the atoll source 4U 1608-52. By fitting the burst spectrum with a blackbody and an adjustable, persistent spectral component, we found that the latter is significantly state-dependent. In the banana state, the persistent flux increases along the burst evolution, while in the island state this trend holds only when the bursts are less luminous and start to reverse at higher burst luminosities. We speculate that, by taking into account both the Poynting-Robertson drag and radiation pressure, these phenomena may arise from the interactions between the radiation field of the type I burst and the inner region of the accretion disk. 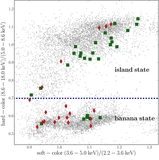